Skip to content
Previous Next
Christina Harris Honored In Samoa 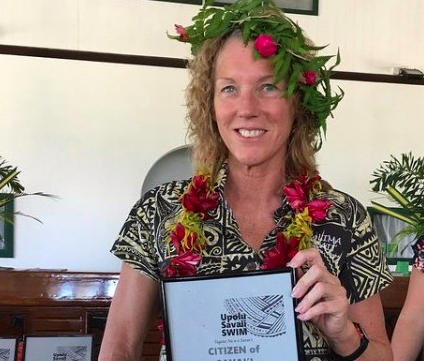 Seti Afoa of Samoa Events announced that Christina Harris as the 2017 Overall Athlete of the Year. “The 54-year-old swimmer from Nelson, New Zealand entered three event in 2017 and earned two titles winning the 22.3 km Apolima Strait in April and the 10 km Pacific Open Water Challenge in July. She then stayed on for the Samoa Swim Series where she finished as the second female and fourth overall in a competitive field,” described Afoa.

“Christina has already signed up to tackle the Five Islands Swims, an ocean swimming series with 5 swims in 4 days over 27 km in challenging conditions in Samoa in September next year.

The Local Swimmer of the Year was Sitivi So’oa’emalelagi, a a 17-year-old Samoan swimmer from Vailele who won the 22.3 km 2017 Apolima Strait Swim in 5 hours 37 minutes 24 seconds.

The International Male Swimmer of the Year was Ray Winstanley, a 31-year-old British swimmer based in Tasmania, Australia who won the the 5 km and 10 km races at the Pacific Open Water Challenge and the 2017 Samoa Swim Series, three 4 km ocean swims over 3 days.”