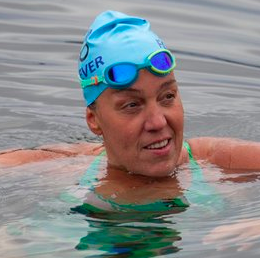 Today at 1 pm, Canadian Susan Simmons will attempt a two-way crossing of the Strait of Juan de Fuca between between Canada’s Victoria’s Ogden Point (north) and the state of Washington’s Port Angeles in the United States.

The 66 km attempt by Simmons, an athlete with Multiple Sclerosis, will be sanctioned by the Masters Swimming Association of British Columbia* Previously, she had planned to start her attempt on August 1st, 2nd or 3rd, but strong 30-knot winds thwarted the previous launches.

It is never easy to delay the swim window for days, let alone weeks. Simmons said, “It has been a tough two weeks mentally not knowing if I will be able to swim during this window and concerns around my fitness level dropping. I have been focusing on staying positive by surrounding myself with my crew and others in my community who lift me up.

We’ve got an all-clear on the weather window.

There’s a little bit of wind Saturday afternoon but it’s going to be pushing me. So we’re going to go out and as long as the wind doesn’t go up above 10, 15 knots we’re fine.”

Brent Hobbs, a fellow British Columbia swimmer, remarked, “Simmons will still face very tricky tides in what’s called the washing machine, where waters of the open Pacific pushing against the inland waters of the strait.”

Simmons has a support crew of 10 people on an escort sailboat, a power boat and 2-3 kayaks in the water with her. Her progress can be followed here and @MS_athlete.

She spoke about her attempt on a radio interview here.

* Other recent swims across the Strait of Juan de Fuca have been observed and ratified by the Northwest Open Water Swimming Association. Simmons explains the organization that will ratify her swim, “In order for my swim to be deemed valid, it must be ratified. The Masters Swimming Association of British Columbia has kindly agreed to sanction and ratify my swim. I will have an official observer who will log my swim, including a GPS track, start, turn and stop time, water and air temperature, swim strokes per minute recorded every 30 minutes, what I eat and drink, my mood and comments as well as other details.” 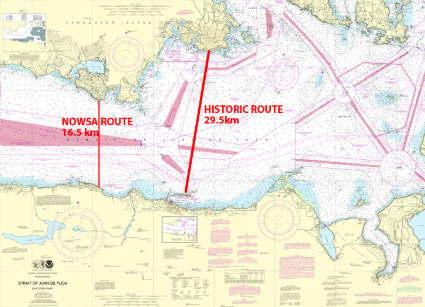 She explained her route today, “I have chosen to swim from the Ogden Point in Victoria to Dungeness Spit just outside of Port Angeles. When I originally planned last year’s single crossing I was hoping to leave from Port Angeles as did swimmers of the past, however this would take me right through a shipping lane. The American Coast Guard suggested Dungeness Spit a few kilometres east of Port Angeles proper.

My understanding of the rule of marathon swimming is that the distance of a crossing is determined by its shortest possible route.

There is a modern route from Port Crescent, Washington to East Sooke Park, British Columbia that is just under 17 kilometers. This route too is challenging and I could use it, however I personally believe I would not be honoring the swim or the swimmers of the past if I chose this route. If my name is to appear on the same list as Marilyn Bell and others for crossing Juan de Fuca Strait I want the distance to be equal to theirs or greater. I also do not want to leave people with the impression the swimmers of the past swam less than they did by branding a new Juan de Fuca crossing and not distinguishing it as shorter.

Throughout any ocean swim the shifting tide may push me off my straight-line course to the east or west, causing me to swim in an S shape as I make the crossing. This will undoubtedly increase my swim distance however as per the rules of marathon swimming I will only record the swim as a 66 (33 x 2) kilometer crossing regardless of the distance I cover. A current can work for or against you. If I was to record that which works against me, I should also record that which works for me. I figure it all evens out in the end. I am also aware that the boat carrying my distance tracker does a lot of back and forth and side to side as it moves to stay beside me. Each of these movements is added to the distance on the tracker making it impossible to determine what was swum. Hence the point to point measurement.“

Exiting the water entirely would require engaging U.S. Customs. The U.S. Customs office is West of Port Angeles in an area where I am not permitted to swim. Should I exit completely at Dungeness Spit I would be breaking the law. My swim director has arranged for an exit to the knees which is in line with English Channel Rules.”