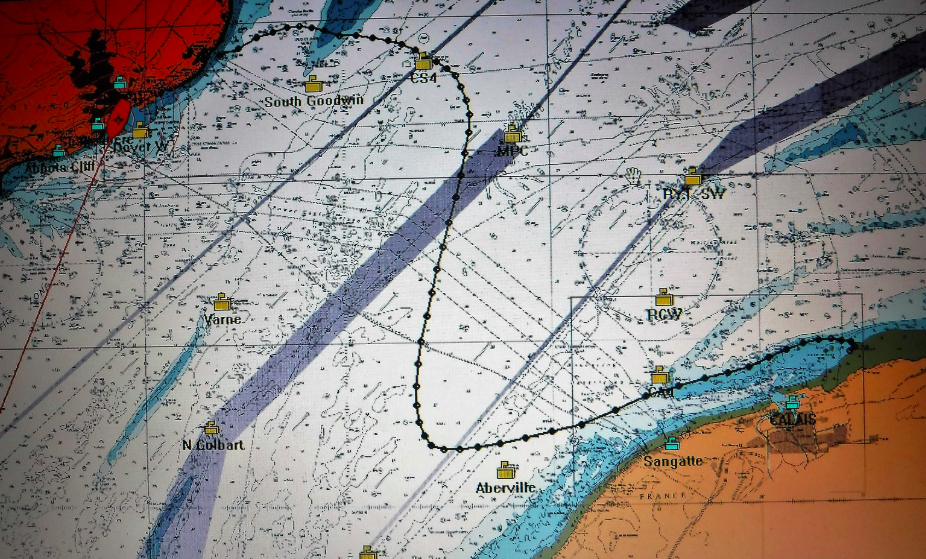 Marcy MacDonald is a podiatrist by professional and a channel swimmer by heart and mind.

Today, she finished her 16th crossing of the English Channel at a beach north of Calais, France in 15 hours 1 minute.

It was her longest Channel crossing during her career that began in 1994. As she reported, “The quest to Belgium did not go as planned, but sometimes the weather over can not be explained. Pilot Michael Oram had plotted a perfect course with all the tidal changes. We were flying – so to speak – at times, then as we turned north along the French coast, we were hit with a long-standing wind, against tide…which is the worse water mix for a swimmer.

Rouge waves were hitting me straight on, that previously were shielded by Gallivant.

I had most of my injury-prone areas (shoulder and upper back) under control, but I must have been hit/thrown enough times that my left Latissimus dorsi muscle was pulled/overly strained…needless to say, my left side became useless and extremely painful with every stroke. Then it became a one-arm event.

After swimming in place [in what] seemed like eternity in front of Calais, I don’t know how many ferries passed by.

Unfortunately, we still had to swim for a couple hours to a safe beach, which was an adventure in itself. Scott [Lautman] swam in with me for safety reasons. I was swimming with only my right arm, alternating freestyle and butterfly drill by now. It was a very cool beach, but scary at times. While walking across a large sandbar, I saw a head in the water. Thinking it was a local taking an evening, I thought nothing of it, until it went underwater, and in a split second it was 25 yards closer.

We were swimming with a seal family, and they certainly were checking us out.”