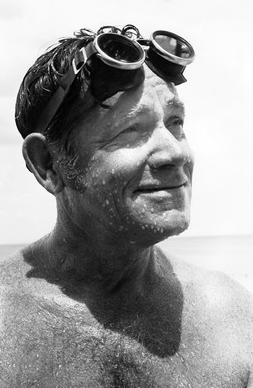 Titanic Baker, Psychic Scammer and Cuban Swimmer Crisis, a program about on Travel Channel’s Mysteries at the Museum program premiered on September 19th.

Mysteries at the Museum is a program hosted by Don Wildman that delves into the world’s greatest institutions to unearth extraordinary relics that reveal incredible secrets from the past. Through compelling interviews, rare archival footage and arresting recreations, Mysteries at the Museum illuminates the hidden treasures at the heart of history’s most incredible triumphs, sensational crimes and bizarre encounters.

Titanic Baker, Psychic Scammer and Cuban Swimmer Crisis showcased the tale of a brave baker, revealed the secret behind a sinister psychic, and investigates the background of Walter Poenisch.

Poenisch (1913 – 2000) was a former American fin swimmer who completed open water swims in Michigan, Ohio, Florida, and in the Atlantic Ocean where he set three records. He was called the World’s Strongest Endurance Swimmer as he towed a 30-ton paddlewheel boat while swimming with his hands and feet shackled.