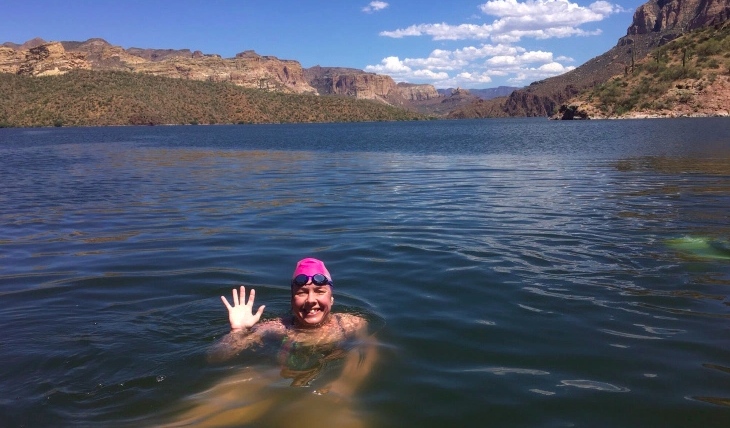 Jessica Kieras was the fastest swimmer at the 4-day 4-stage SCAR Swim Challenge in Arizona.

The 38-year-old from Oregon who won the coveted SCAR Buckle discussed her experiences at the 66.9 km S.C.A.R that included a 15.2 km crossing of Saguaro Lake, a 14.4 km crossing of Canyon Lake, a 27.3 km crossing of Apache Lake, and a 10 km night swim in Roosevelt Lake.

Daily News of Open Water Swimming: What do you love about SCAR?

Jessica Kieras: What I loved most about SCAR was the community aspect of the event and the scenery. As a newcomer to the community, I felt supported, welcomed and encouraged. This event and the people involved with it lead the way on friendliness and interpersonal warmth. As for the scenery, I love to adventure in the outdoors and to be able to experience these remote places by water was wonderful.

Daily News of Open Water Swimming: When did you start thinking about participating in SCAR?

Jessica Kieras: I started seriously thinking about participating in SCAR after I did END-WET last year. I talked with my teammate, Jamie Proffitt who did SCAR in 2016. He encouraged me to do it.

Daily News of Open Water Swimming: How did you specifically train for SCAR?

Jessica Kieras: I trained for SCAR by doing a lot of distance tolerance work. I swim 6 days per week and made sure to combine my four longest and hardest days in a row each week. I did two mini-SCARs – Jamie Proffitt’s term – for a four-day training block that he did when he trained in 2016. Thursday was 3 hours; Friday 4 hours; Saturday 6 hours and Sunday I did a cold lake swim. I hit my maximum average distance per week 2.5 months before SCAR, so that I had time for my body to fully adjust to that distance. I also contacted Rich Suhs, my club coach from high school and he encouraged me to work on my upper body power by doing higher intensity, longer rest training and swimming with a bucket, just as we did on my club team 20 years ago.

Daily News of Open Water Swimming: Who was your kayaker/escort?

Jessica Kieras: My kayaker was Daniel Baugher who is also my boyfriend. He put a lot of his heart into preparing for and participating in SCAR as well. We have a system we have spent time developing that works for us. He is a very solid person and that makes it easy for me to trust him and just swim.

Daily News of Open Water Swimming: Did you think you had a shot to win the swim before you began?

Jessica Kieras: A few months ago, someone remarked they thought I could be a contender. I dismissed it at the time, as my focus has always been to just complete the event. As it got closer, I started to wonder what if…I tried not to think too much about it, since getting to know people and appreciating the experience are more important to me at this stage of life.

Daily News of Open Water Swimming: Were there any unpleasant or funny moments along the way?

Jessica Kieras: I had a couple weird pains in the middle of Apache Lake, but they went away after some stroke adjustments and swimming gently for awhile. The most exciting thing I heard about was when a diamondback rattlesnake boarded one of the pontoon boats. I wasn’t there, but I later saw the video. During the night swim, Dan pointed to something dark and thin in the water and said a stick is following you. I freaked out a little bit because I thought it was a snake, but it was actually just a stick getting pushed along by the wind.

Daily News of Open Water Swimming: Were you sore or unusually fatigued after any of the swims?

Jessica Kieras: I was sore and tired after the swims, but not unusually so. It felt just like my distance tolerance training. I found that using my foam roller, eating food, and taking a hot shower made me feel 90% better.

Daily News of Open Water Swimming: What was your preferred in-race hydration/food source. What did you eat between the swims?

Jessica Kieras: I drank Infinit GO FAR drink and water with saltstick tablets dissolved in it. I had a Coca-Cola after four hours in Apache, a tradition I got from Linsey Corbin, a professional triathlete who I train with. In between swims, I tried to eat as much as possible. I found that eating made my muscles hurt less. One memorable meal was the Cowboy Cookout at Saguaro Guest House. I ate a huge steak, some pulled pork, half a baked potato, lots a veggies, a large salad, a role and topped it off with strawberry shortcake. It was incredibly good.

9. Daily News of Open Water Swimming: Can you explain the logistics of getting to the race and then travel between each of the races?

Jessica Kieras: Dan and I rented a mid-size SUV at the airport to travel around in, because adjectives used to describe the road to Apache Lake range from sketchy to terrifying. It was sketchy in places, but it is also beautiful and one of our favorite parts on the journey. Getting to the start of each race involved boarding a boat piloted by awesome SCAR volunteers and swimming a short distance to the starting buoy line.

10. Daily News of Open Water Swimming: What swims are next for you?

Jessica Kieras: I am trying to plan one or two long (20-30 km), local (Oregon) documented swims in low to mid 60°F water. I’m going to do a fun swim (Mighty Mac) across the Straits of Mackinac in Michigan and I have a date to swim Catalina Channel this September.

For a first-person account of each of her swims, visit Kieras’ blog here where she also discusses her training in detail.