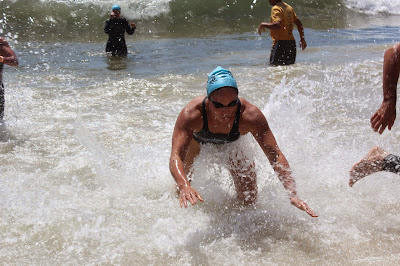 50 Things An Open Water Swimmer Should Not Do

WOWSA also offers a list with the opposite kind of information: 50 Things An Open Water Swimmer Should Not Do.

These recommendations range from simple acts to major infractions of the rules or traditions of the sport, from safety to etiquette:

1. Swim alone.
2. Assume boaters and windsurfers see you and will move for you.
3. Assume conditions get better.
4. Take coral from a reef.
5. Pollute the ocean.
6. Leave trash on the shore.
7. Skip acclimatization and just “gut it out”.
8. Assume additional bioprene is good enough without proper acclimatization.
9. Assume you know more than the local swimmers.
10. Try to outswim a pack of experienced swimmers.
11. Trip on a seashell or in the sand during an onshore start.
12. Trip and fall short of the finish line on an onshore finish.
13. Miss a turn buoy.
14. Continuously slap the feed of the lead swimmer while drafting.
15. Ignore the shape of the pack while racing.
16. Swallow lots of water.
17. [If an elite woman], go out slowly.
18. [If an elite man], go out fast.
19. Ignore the command of the referees.
20. Ignore railroading when possible.
21. Bring only 1 pair of goggles to a race/swim.
22. Forget Vaseline or lanolin on possible chafing spots.
23. Get Vaseline or lanolin on your goggles.
24. Zipline another swimmer.
25. Smear sunscreen over your race numbers.
26. Expect toilet paper in a portable toilet minutes before a race.
27. Ignore or argue with escort boat pilots.
28. Eat new foods on race day.
29. Try a new swimsuit on race day.
30. Talk during the pre-race instructions.
31. Keep swimming if your vision narrows.
32. Ridicule those who wear neoprene.
33. Retaliate.
34. Ignore your core.
35. Forget flexibility.
36. Breathe only one one side, always.
37. Impede, scratch, pull, cut off, veer into, slap, whack, obstruct, interfere, punch or elbow others.
38. Cross the path of surfers, windsurfers or boaters.
39. Swim behind a boat.
40. Be a pirate swimmer.
41. Ignore the core.
42. Yell shark and point to it from the escort boat.
43. Urinate on jellyfish stings.
44. Use an EpiPen® (epinephrine) on box jellyfish stings.
45. Draft off a pace swimmer.
46. Argue with a hallucinating swimmer.
47. Shine a bright light on a swimmer at night.
48. Ignore a whistle when swimming in the open water.
49. Touch a Shark Shield that is on in the water.
50. Grab the fin of a baby dolphin.

On the opposite side of the equation, here are 50 Things An Open Water Swimmer Should Not Do.