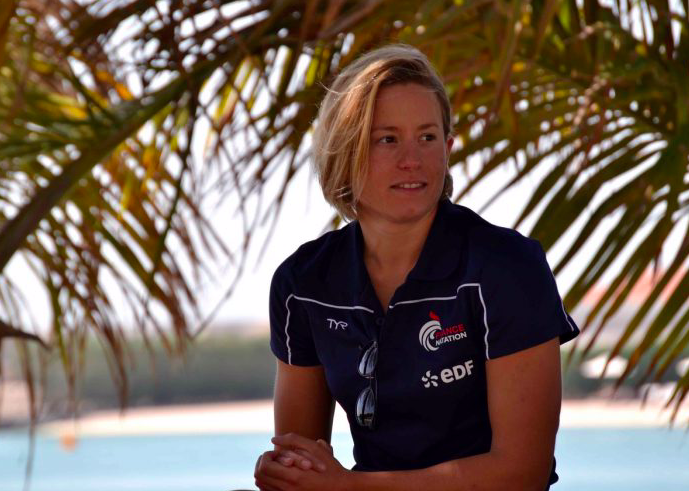 Since winning both the both 400m and 1500m freestyle events at the 2006 European Junior Championships and then transitioning to the highest levels of open water swimming, Muller has traveled the world.

After two years of gaining experience on the FINA 10K Marathon Swimming World Cup, she qualified for the 2008 Beijing Olympics after placing 9th in the 10 km at the 2008 FINA World Open Water Swimming Championships in Sevilla, Spain

She traveled to Beijing with high hopes, but her initial Olympic experience did not end as she had dreamed.

In 2008, Muller finished 21st in the inaugural Olympic 10K Marathon Swim against a field of 24 other competitors in 2:02:04.1, two minutes behind gold medalist Larisa Ilchenko of Russia.

But in a theme that has illustrated her commitment and passion for swimming, she got right back into the water and continued to compete on the FINA World Cup series. She finished 30th in the 2009 series, 15th in the 2010 series, and 10th in the 2011 series, gaining more and more experience with every stop on the World Cup.

Finally at the 2011 FINA World Championships in Shanghai, China, Muller touched out American Ashley Twichell to clinch a silver medal by 0.1 seconds in the women’s 5 km swim in 1:00:40.1.

But heartache and disappointed followed her the next year as she missed qualifying for the 2012 London Olympic Games.

Again, she jumped back into hard training. But she switched up her preparations. In 2015, she moved from Sarreguemines to the Cercle des Nageurs Narbonnais where coach Lucas ratcheted up her training intensity and volume. Her potential was tapped and the hard work paid off.

Leading up to the 2016 Rio Olympics, she tied Rachele Bruni for the gold medal in the 10 km marathon swim at the European Open Water Swimming Championships.

Now all eyes of the French media and her international competitors were on her.

Fatigue and exhaustion were a daily experience after the long, tough training sessions with Coach Lucas and her French teammates who were ruling the open water waves in 2015 – 2016 period.

But disaster struck again at the 2016 Olympic 10K Marathon Swim in Rio de Janeiro. She was disqualified on her very last stroke of the race when she was judged to impede eventual silver medalist Bruni. She was red carded by head referee John West of New Zealand, a crushing blow in what she had envisioned to be Olympic success.

It was tough to train for two Olympic quadrennials and then have an Olympic medal slip away on the very last stroke of the 10 km race.

Muller transitioned from that disappointing summer in Rio to a renewed passion for swimming in the fall and winter in France. But she wanted to change things up; she wanted to challenge herself in the open water in a different way.

So she entered the 57 km Maratón Acuática Internacional Santa Fe – Coronda, the opening stage on the 2017 FINA Open Water Swimming Grand Prix circuit, and finished third in 9 hours 5 minutes. It was a new challenge that she took head on.

She downshifted distances and then won the FINA 10K Marathon Swimming World Cup in Abu Dhabi that March of 2017. Her confidence started to soar again.

In July, she won the 10 km race at the 2017 FINA World Swimming Championships in Lake Balaton, Hungary. She added to her medal haul with a silver-medal performance in the 5 km race and another gold in the 5 km team relay with her French teammates David Aubry, Oceane Maryse Jeannie Cassignol, and Marc-Antoine Olivier.

Three races at the highest level of competition had resulted in 2 gold medals and a silver in Lake Balaton, only a year after facing the greatest disappointment in her life. She was deservedly named Swimming World Magazine‘s Open Water Swimmer of the Year for 2017 and set her plans for the rest of the Olympic quadrennial.

Knowing that the 2019 FINA World Championships and 2020 Tokyo Olympics will be held in flat, warm conditions, she and her French national teammates traveled and trained in similar conditions. She won the 5 km race at the Tahiti Swimming Experience in December 2018 and finished second at the LEN Open Water Cup 10 km race in Eilat, Israel. She also traveled to the 2019 FINA / CNSG Marathon Swim World Series in Seychelles where she finished fifth and finished fourth in the 10 km LEN Open Water Cup in Lac du Causse in Brive, France.

This coming Sunday in Gwangju, South Korea, Muller will be able to measure her fitness and tactics again against the best in the world. And the pressure is on, once again. She must finish in the top 10 in the 10 km marathon swim next week to return to her third Olympic Games.

On the shores of Tahiti, she spoke about open water odyssey from childhood to the Olympics.

“I started swimming with my father. It was the life of a normal competitive swimmer for 10 years. When I was 16, I first started to dream about the Olympics.   I focused on backstroke, 100 meters.

But at the 2006 European Junior Championships, I won the 1500m freestyle. However, there was no 1500m race at the Olympics, so I started to look at the 10 km marathon swim as an 18-year-old.

I really had no precise goals for the open water in Beijing. It was the first time that I competed at the international level and I did not what to expect. Our team did not prepare that well and the French Swimming Federation did not know exactly what to do. We certainly were not as well prepared as we are now. We did not have Stéphane Lecat back in 2008.”

The race was held in warm conditions at the Shunyi Olympic Rowing-Canoeing Park outside Beijing. “I never thought to drink and it was hot. I did not hydrate at all because I thought it was possible to compete without drinking. It was OK, but at the end, I was very disappointed. Mentally, it was tough to accept.”

I went to the 2009 FINA World Championships in Rome where the conditions – water and air very hot. It was a disappointing experience again. The 5 km race was OK, but the 10 km race was a repeat of my experience in Beijing

Basically, Rome was very hot and I had to learn about the little things as I gained experience.”

Then for the 2012 London Olympics, the opposite conditions thwarted her. She became hypothermic in the Olympic qualifying race and did not qualify for London.  “That was very disappointing to me; I wasn’t prepared for very cold water.

It was another lesson that I had to learn. I realized that my body was not used to the cold water. My body temperature dropped to 34°C.

So 2012 was a hard year. I had no more objectives to swim for, no championships and no Olympics. But I did not think that I would quit. I felt that I was still young and have things to prove and still many things to learn.

Then at the 2016 Rio Olympics in Copacabana Beach, I tried to adapt to the conditions and the waves, but I felt seasick. I usually get seasick. In western France, I was able to train for seasickness.

So going into the 2016 Olympics, I was confident and felt my previous success was an indication of my destiny. I trained hard under Philippe Lucas and felt confident that I was going to be on the podium after the race.

During the race in Copacabana Beach, I didn’t see Sharon van Rouwendaal [the eventual gold medalist] take off and did not see her.  I only saw the Italian (Rachele Bruni) and the Brazilian (Poliana Okimoto). At the end of the race, I thought I won.  I had no idea.”

Muller then swam to shore, collected her gear, and got ready for the awards ceremony. She was just about to get the shock of her life.

“Then I heard the announcer announce the podium positions: gold to Sharon van Rouwendaal, silver to Rachele Bruni, bronze to Poliana Okimoto.  I couldn’t believe it.  I thought the team was going to take care of this [issue]. When the athletes were called to the podium, I realized it was too late.

I thought for sure the team was going to handle this. They filed another protest and waited for FINA’s final official decision. I waited and waited.”

But her dreams were dashed, yet again.

“It was too much.  It was time to relax. I stopped swimming for two months. That first month was very hard. I was not eating; it was difficult to sleep the month after Rio.”

Then she traveled on October 15th to Thailand.

“I started to swim, only once a day and started to come back slowly. I felt like I wanted to go back to swimming.

I thought, ‘I am swimming, but what am I going to do? My goal was not to be a world champion again. I felt like I wanted to do something else like triathlons or other kind of races.

So I entered the 57 km Santa Fe river marathon race in Argentina. I talked with the French Swimming Federation, but they didn’t want me to go too far away from my speciality. I thought back then that the Santa Fe marathon swim would be the end of my career, but not now. I thought, ‘Oh why not? I have nothing to lose.’”

The Maratón Acuática Internacional Santa Fe – Coronda, the opening stage on the 2017 FINA Open Water Swimming Grand Prix circuit, was held in February. She and Lecat, her open water coach, just wanted her to finish it. She did, in 9 hours 5 minutes. “When I first got to Argentina, I really got into the race and became confident that I could finish such a long race.

I was just swimming and swimming. One hour passed, then another hour. I felt I was dead. I was so tired, but I was proud of myself that I overcame the physical fatigue.

In a way, I thought Santa Fe would be the end of my swimming. But it was actually the beginning.

I had finished the mourning; this 57 km was the beginning.”

As a result of that trip to Thailand and Argentina, her comeback plans to Tokyo in 2020 were taking shape.

She competed at the 2017 FINA World Championships in the 25 km marathon swim in Kazan, Russia finishing eighth in 5 hours 28 minutes. “I trained so much but my objective was only to finish and see I could do a 25 km race.

It was a big challenge and I had a big goal to overcome with everything that I had faced. So I achieved my goal.

But nothing was making her happy. There was no dream; even then, going back to the Olympic Games was not a dream of mine.”

But then her 10 km international competitions were successful in 2017. “I had something to do and racing was inside of me. I felt the pressure on me was less and I felt so much better. Plus, the 10 km races seemed easier after the 57 km race. I just did not feel any pressure anymore.”

“Someway, I felt that lost the value of competing, of working and respect for the sport. But I regained these feelings in Santa Fe and now I am able to exchange sharing with sharing, respect with respect. And it will be increasingly so as the year continues.”

She started to train with renewed vigor and passion. She does distance freestyle sets in the pool like 4 x 2000m on 24 minutes and 10 x 1000 on 12 minutes in her home 50m pool once per month.

She focuses on everything including stretching 15 – 20 minutes every night and resting for recovery.

“All my friends and family are supportive of me whenever I go home. They tell me that I can do it [i.e., make her third Olympics].”

This Sunday is her comeback.