Matt Williams On Summiting Before Swimming The Lake District 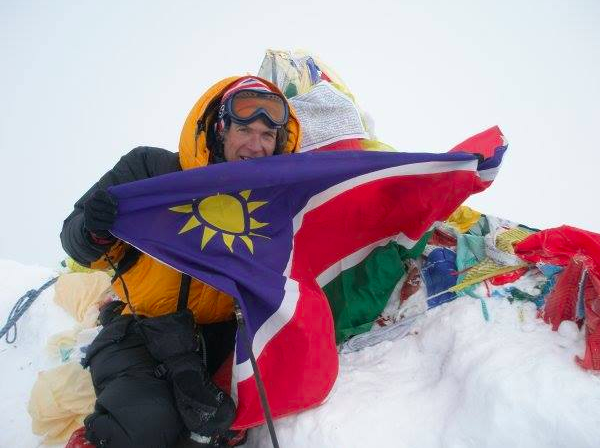 Born and grew up in Namibia, he is an investor in renewable energy projects, serving as the Chief Financial Officer of a British renewables investment firm called Blue Energy.

He has climbed all over the world including a summit of Mount Everest in 2008 that raised money for a Namibia orphanage.

The current Manchester resident was the first person from Namibia to climb Mount Everest.

He crossed the English Channel in 2010 in 15 hours 25 minutes under the auspices of the Channel Swimming & Piloting Federation with Neil Streeter as his escort pilot and Irene Wakeham as his observer. He was the second Namibian-born person to swim across the English Channel after Bobby Jo Basingthwaite.

He was the fourth person in history to complete the Peak and Pond Challenge.

In August 2019, he will attempt to swim the length of all the lakes in the Lake District here in the UK in one continuous trip, walking between each of them – which may have not been accomplished before.  He explains, “It’s about 45 miles of swimming and 90 miles of walking which I am going to split over about 10 days ending with the Coniston Chill and Windermere One Way organised mass swims on the last weekend in August. I will be doing it in a wetsuit as I’m not as big as I was during the channel days, should be fun though.”

An ambitious and relentlessly active individual, he explains his mindset and accomplishments.

Daily News of Open Water Swimming: What motivated you to attempt and achieve the Peak and Pond Challenge?

Matt Williams: I really wasn’t aware of the Peak and Pond when I completed it, and I have wanted to do both feats individually for their own sake for as long as I can remember, going back to childhood. I therefore pursued them both individually at times when they were convenient to do so around my work and home life. It was nice to find out about the Peak and Pond club / challenge afterwards though.

Daily News of Open Water Swimming: Do you see yourself as more of a mountaineer who swims or a swimmer who climbs?

Matt Williams: That’s a difficult one, it changes over time depending on what I am training for. Overall though, given where I live and the relative access to a pool vs the mountains I’d probably say I’m a swimmer who climbs since I can get to the pool 3 times a week pretty easily. Unfortunately the same can’t be said for the mountains.

Daily News of Open Water Swimming: What is your athletic or endurance sports background?

Matt Williams: I have always been a good athlete without really excelling at any one sport. Growing up in Namibia my little town had a 50m pool so I have been swimming with a squad quite young. Then at school in the UK, I played pretty much every sport I could (tennis, squash, rugby, football, cricket, cross-country), representing my county at some of these. After school I became interested in triathlon and seemed to have some natural ability, becoming North West England junior champion and placing 3rd at the British junior championships in 1998. However, I could not sustain the training regime alongside a university student lifestyle and only returned to triathlon in 2012 when I qualified for the Ironman World Championships in Hawaii, before then winning a silver medal at the ITU age group World Championships in 2014.

Daily News of Open Water Swimming: Were you swimming at the time you were training for your Mt. Everest summit?

Matt Williams: No, I was purely focused on climbing in the run up to Everest. I was fortunate that my parents lived in Colorado at the time which made for reasonably easy training trips, but I also climbed in Scotland and Argentina (Cerro Aconcagua).

Daily News of Open Water Swimming: Did your preparation for and summit of Mt. Everest help you physically or mentally for the English Channel crossing?

Matt Williams: Mentally yes, very much so. In particular from the perspective of not looking too far ahead as you are then in danger of being overwhelmed by the size of the undertaking. Reducing the task into manageable chunks of time, or steps, or strokes, or anything to take your mind off how far there is to go was the same across both challenges.

Similarly the forward planning, physical and logistical preparation for each cannot be underestimated. Physically though, Everest is not great preparation for swimming. I suffered quite a lot of weight loss and muscle deterioration which is the opposite of what you need to swim the Channel.

In fact, the hardest part of swimming the Channel for me was putting on and retaining weight for thermal insulation, no matter what my diet or physical exercise regime is at any given time, for all of my life I have pretty much remained a constant (slim) weight and build. As a result, until my metabolism slows (possibly as I get older) I probably won’t try another cold water swim without a wetsuit.

Daily News of Open Water Swimming: How can you describe the relative difficulty of each achievement (i.e., summiting and swimming)?

Matt Williams: I would say that the actual act of summiting Everest is a more difficult physical achievement because the actual Channel swim is essentially one (long) day’s effort. However, you are on the mountain for over a month, and your summit bid actually lasts 5 days above base camp.

As a result of the altitude, therefore your muscles are slowly deteriorating and you are probably suffering from sleep deprivation and a hacking cough (the “Khumbu cough”) as well.

On the flip side, I found the training for the Channel to be far more challenging than for Everest because I love being in the mountains on any given day, no matter what I’m doing . However, I did not love swimming in Dover harbour every Saturday and Sunday through the summer of 2010.  I found the mental side of Channel swimming very difficult to deal with, there is nowhere to hide in cold water in Speedos, you are cold to the very core and it is very easy for negative and depressing thoughts to enter your mind (when you are getting up at 7:30 am every week end while everyone else you know is still warm in bed) which I found made persevering with the training very difficult.

Daily News of Open Water Swimming: How can you describe the final achievement of each (i.e., standing on top of Mt. Everest and taking the last stroke and standing on the shore of France)?

Matt Williams: I would say they were both met with a huge amount of relief that I had made it, but I would say that the feeling on completing the Channel was the happier. It was dark, but I remember most distinctly the feeling of my hands hitting the ground mid-stroke and crawling out of the water, it felt awesome not to be swimming anymore.

On Everest your mental faculties are severely impaired due to the lack of oxygen so the memory is a little hazier, plus any celebrations at the top were tempered (for me anyway) by the knowledge that the job was only half done, most people that die do so on the way down. The most celebratory moment on Everest was actually much further down the mountain when I woke up the next day and, after those initial couple of seconds of orientation when everyone wakes up in the morning, remembering what I had achieved the day before. Ironically it was only at that point that I felt on top of the world.

Daily News of Open Water Swimming: Did you eat and drink similar things climbing up Mt. Everest and swimming across the English Channel?

Matt Williams: No, they are such different environments that you can’t eat the same food. On the Channel swim feeding was strictly regimented at hourly, or half hourly, intervals. There was always some warm energy drink (Maxim) mixed with fruit juice, and some easy to swallow sweet food as an option if I wanted it – this included jelly babies, tinned peaches, strawberries etc.

On Everest the food is far more complex because you are there for so long. In base camp the food is great considering your dining tent is perched on a glacier – pasta, curry, even cake. Above base camp though it is the usual camping fare – boil in a bag dehydrated meals that are high in calories and low on taste. However, it is very difficult to eat much as the altitude suppresses your appetite substantially while you are there. I don’t really remember eating or drinking much at all on the 18 hour summit attempt itself which was probably a mistake. If you don’t keep a water bottle inside your jacket then your water bottles all freeze anyway, I ate the occasional snack bar.

Daily News of Open Water Swimming: What do you do now (in the extreme/adventure/endurance sports world)?

Matt Williams: There are lots of other things I would love to do. On May 23rd this year is the 10th anniversary of my Everest summit so I am heading back to Nepal to climb Lhotse which is right next to Everest and the fourth highest mountain in the world at 8,516m. It shares 4/5ths of the route with Everest but has a more technical summit couloir, I like the idea of looking across to Everest where I was 10 years ago.

Swimming-wise, I would like to do an easier warm water swim like the Strait of Gibraltar, but my wife has recently started swimming so we are looking forward to doing some wild swimming events together in the UK. I also have some unfinished business in triathlon – it would be nice to win an age group world championship having come so close in the past, and my wife really wants to go to Hawaii so she is very keen for me to qualify for the Ironman World Championships again.  There are so many great mass participation ultra events now (like the Otillo, or UTMB etc) that it is hard to pick what to do, but I’ll always keep myself busy.

Daily News of Open Water Swimming: Do you know well the biographies of Sir Edmund Hillary and Captain Matthew Webb? Do you see any similarities between these two icons of their respective sports?

Matt Williams: I’m afraid I haven’t read either of them, although I did get a Kindle for Christmas so I will put them on my list. I do see some similarities between the two, but also differences, particularly as Hillary was very much part of a team effort, whereas Webb seemed to work far more on his own. Both were extraordinary feats of endurance though for their time, and cannot really be compared with the relative easy with which so many of us can now attempt the challenges that they pioneered.

Update: Williams climbed Lhotse in 2018.  In August 2019, he will attempt to swim the length of all the lakes in the Lake District here in the UK in one continuous trip, walking between each of them – which may have not been accomplished before.  He explains, “It’s about 45 miles of swimming and 90 miles of walking which I am going to split over about 10 days ending with the Coniston Chill and Windermere One Way organised mass swims on the last weekend in August. I will be doing it in a wetsuit as I’m not as big as I was during the channel days, should be fun though.”