Skip to content
Cameron In The Caribbean, From Barbados To St. Lucia

Cameron In The Caribbean, From Barbados To St. Lucia

There are two ways to travel between the two beautiful islands of Barbados and St. Lucia in the Caribbean Sea:

* He rowed 6,620 km across the Indian Ocean from Australia to Seychelles in 56 days in 2014.
* He cycled 6,000 km from Beijing, China to Kanyakumari, India along the Silk Road, that took jim 4 months.
* He cycled 1,500 km from Lands End to John o’ Groats, a ride from the southernmost tip to the northernmost tip of the UK in 6 days.
* He cycled 1,000 km across Colombia in a ride that took him over the Andes mountain range.
* He completed the Oceans Seven that took him 6 years to complete.
* He attempted a circumnavigation swim around Barbados twice, finishing in 40 hours 46 minutes on his second attempt.

So when the political and bureaucratic obstacles to attempt a swim from Cuba to Florida proved to be insurmountable, he did not waste time to shift gears. “Cameron has put in the months of hard training and mastered the art of recruiting and preparing his dryland and in-the-water escort team, as well as funding his attempts,” observed Steven Munatones. “So when his Cuba swim fell through due to barriers beyond his control – despite his tremendous efforts – he knew that he has a lot of miles banked up in his training – and wanted to put it to good use.”

Given the current political climate and the situation at hand, Bellamy said that “this swim is the best case scenario for me.” After his successful 90 km circumnavigation swim around Barbados, he has plenty of support them and can use it as a training and logistical support base. 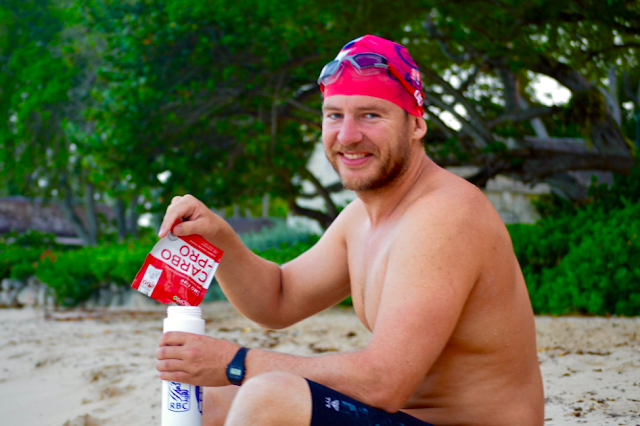 He explained further, “I [recently] learned that I was denied the permission needed for my support boat for the Havana-Key West swim. The regulations have become very strict since June.

I have spent the last 8 months training for the swim that was scheduled for the second week of September. Obviously, I am extremely disappointed. In 2018, I swam about 96 km around Barbados, which I was using as a test for the 166 km Florida swim. My longest swims before Barbados were under 20 hours and the Florida swim is likely to be in the 50 to 60 hour range.

During 2019 I put in countless hours of training, which required me to reduce my work hours, spent considerable time researching the swim, put down a deposit to secure the support boat, assembled a support crew to join me on the swim and even, almost, hired a legal team to help me navigate the complex legal issues.

Since June, I’ve had a fear the Florida swim might not come to fruition and I’ve quietly researched an incredible plan B should plan A not work out. A swim from Barbados to St. Lucia has never been done, is a comparable distance [to the Cuba-Florida swim], and will be a swim of epic proportions in some amazing water in the vast open sea. In myriad ways, it’s trickier than the Florida Straits.”

Similar to the infamous Cuba-Florida swim, the Barbados-St. Lucia can be littered with deadly venomous box jellyfish [shown above] – a critical obstacle to his success in this unprecedented attempt.