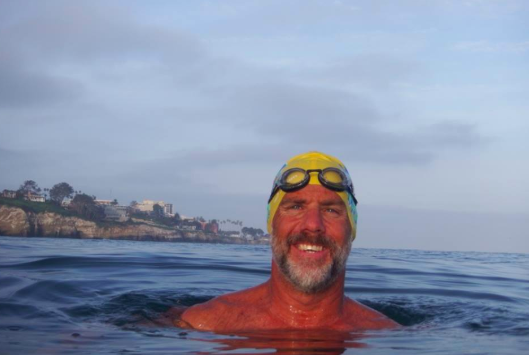 At 7 am, there were only a few people around, a time well before the lifeguards come on duty.

He describes what happened that morning, “We were ‘up top’ above the La Jolla Cove beach along the walkway railing watching the conditions and timing the wave sets. Out of the corner of my eye, I saw a guy walking down the stairs to the beach in a swimsuit, but no fins. The water conditions that day certainly called for fins with the larger waves and high tide conditions – even for an experienced ocean swimmer who is very familiar with La Jolla Cove.

I didn’t recognize him as a regular La Jolla Cove swimmer, so I continued to watch him enter the water and start swimming.

Immediately I knew by his swim stroke that he was not a very strong swimmer. He was breathing only on his right side while the waves were coming on his left. He was only about 15 meters out and he got surprised by the first wave’s whitewash. The waves were big enough that they were breaking outside the Cove; the whitewash was rolling into shore and over the reef rocks and with significant force and power, additionally powered with the high tide.

He came up noticeably stunned and just floated there waiting for the next wave.

He did not even duck under the next wave. I immediately thought, Oh! He is not prepared and obviously not experienced. He was now getting pushed very near the opening of The Hole – a very dangerous spot around the Cove during high waves into which people can get pushed and get smashed on the rocks.

On the third wave, he again doesn’t duck under. When he comes up, he starts trying to swim, but his arms aren’t even getting out of the water.

I said out loud, ‘Oh man…he is already tired.’

With him now being pushed right in front of the Hole, I knew I had to go in.

I was still completely dressed since it was a cold morning and we weren’t going in the water yet. So, I had to run back to my bag, strip off my sweats and get get my swimsuit on. I then grabbed my fins and started back toward the stairs down to the beach.

By this time, probably about a minute later, I could see the swimmer was in The Hole and very much in distress.”

A video taken by a bystander that shows what happened with the swimmer during this time while Simonelli was getting ready.

Simonelli continues his recollection of the rescue, “The man was getting picked up by the breaking waves at the opening of The Hole and looking like he was getting smashed into the reef.

As I made my way out to him, he was getting flushed out of The Hole with the outflowing rip current that is created by the receding water, but he was now right near the other side of the Hole called Razor Reef.

When I got to him, he was barely keeping his head above the sloppy choppy water and screaming, ‘Help me. I’m gonna die.’

I yelled, ‘More waves are coming. We gotta go.’

But he couldn’t or wasn’t moving, so as I got closer to push him in the right direction, he tried to grab me. I grabbed his reaching arm and twisted him around so he was facing away from me.

I didn’t have anything but my fins and had no lifeguard rescue can or tube, so I had to push him.

He was in severe panic mode and just trying to keep his head above water to breathe. His body was vertical and rigid, so I couldn’t make enough progress to get outside and away from The Reef and The Hole before the next set of waves came.

I was seeing the waves coming and telling him to exhale and calm his breathing and get ready to go under.”

Simonelli explains, “Duck diving under allows you to get under most of that chaos of the wave as it washes over the top of you. This way you can make some progress forward, or at least not get pushed back as far and continually getting cycled back into the break zone of the waves.

I get him under – somewhat – the first wave, but he’s panicking and not getting any breath to get ready for the next wave.
We’re now getting pushed back toward The Hole. After the next wave, he’s now really fighting to stay afloat and breathe. So, with the third bigger wave as I’m pushing him to go under the surging white wash he stiffens up even more fighting to stay above water. So then I’m now totally exposed at the surface and all the force of the wave and I get flipped backwards several times and I was expecting to hit the rocks.

I regain my position under water so at least my feet are behind me, still waiting to feel the rocks.

I surface, but now I’m around 30 feet behind him and the next wave is rolling in fast. I start swimming, but I can tell that I’m not going to reach him before the next wave hits him. I get to about 3 meters behind him and I’m yelling to him to get a breath and go under. I go under early and spread my arms out wide hoping he gets pushed into me.

It worked. He hit my left arm and I was able to grab him and pull him back to the surface quickly for a breath.

We were back in The Hole and had to go through another cycle of waves, hoping we did not get pushed into the rocks or onto the reef.

I continued to push his panicked, rigid body as best I could toward the right side to get in the receding rip current.

But again it was very slow going pushing a rigid, vertical body through the water. There’s a bit of a lull in the waves and we were able to make some progress, but not enough before the next set came in. We went through the whole thing again. Luckily, this set was not as big and I was able to keep hold of him as the waves crashed over us.

So, again I pushed him to the right into the rip. This time there was a longer lull and I was able to get him outside and away from The Hole and Razor Reef.

It took about 5 minutes to get him outside and around to the other side of the Cove to line up for getting back into the Cove beach with the waves.

I had not heard any sirens or seen any lifeguards show up yet, so I was expecting and thinking that I needed to get this guy into the La Jolla Cove Beach because there was nowhere else to go.

All the while I was pushing him outside and around to position we had to get under some wave white wash, not huge but still significant challenge to get this guy through each one.

Finally, after we were waiting in position for maybe a minute, I heard a siren. Then I saw a lifeguard on the Cove beach starting out on a rescue board.

I was relieved to see that as I wasn’t looking forward to having to get this guy back into the Cove beach with potential for another big wave set to come.

While waiting for the lifeguard to reach us. We were about 150 meters out, I was watching for any waves. Sure enough, I saw a set coming and quickly realized that it was big enough that it was going to break in front of us, so I told the guy we gotta swim out now.

I started pushing hard him hard and we just barely got over the first wave. As we ddid, I heard the lifeguard behind us yell, “Oh shit!” I managed getting the guy over a couple more almost breaking waves, and then the set subsided. I looked back for the lifeguard and I saw him swimming.

Oh dammit! I said to myself. He had lost the rescue board in that big wave. I later learned that the rescue board got pushed into The Hole and smashed in two pieces on the rocks. But, being an experienced veteran lifeguard, he had also brought his rescue buoy and fins.

I was still thinking we were gonna have to take this guy back through the break-zone to get him into shore. But, seconds later I saw a La Jolla Shores Beach lifeguard Jet Ski coming toward us from across the bay. When he arrived, I helped the swimmer get up on the rescue sled which was towed on the back of the Jet Ski. He was so fatigued, it was hard to get him up on the sled and get him to grab the side straps to hold on.

Then, the other lifeguard in the water climbed on the back of the sled behind the guy to hold him in place, and they sped away to take him back to the Shores beach.

I took a minute or two to watch and wait for a lull. When I saw one, I started back into the Cove. I didn’t quite make it before another set rolled in, but I was able to manage the waves and get back into the Cove beach safely.

It was certainly a serious experience. I had never been in The Hole in big wave, high tide conditions like that day. I didn’t really think about that though as I was going out to him. But I definitely did while we were in The Hole. Twice! I think that guy really would have drowned if I had not gone out to help him.”