Photo by Anna and Alex during typhoon season in Japan

After the recently held Tokyo 2020 Marathon Swimming Test Event in Odaiba Marine Park was shortened from 10 km to 5 km and its start was moved up to 7:00 am as a precautionary measure against the 29°C – 30°C water, the swim leg of the test event for the Paralympics Triathlon was cancelled.

He recently wrote a in-depth article about how sewage is treated in Tokyo and how it can be ultimately reduced from entering the Olympic swimming venue while improving the quality of life for all Tokyo residents and visitors.

At the triathlon test event, the E. coli levels were measured at the Olympic venue 21 times higher than the standard set by the International Triathlon Union. “This was not surprising given the fact that it rained in Tokyo 3 days before the event,” observed Steven Munatones. “The impact of urban runoff cannot be underestimated so close to shore amid artificial islands that sit next to a metropolis like Tokyo of 9.2 million inhabitants. No matter what the wastewater treatment system is – and Japan is well advanced in that regard – but there are limitations. It is impossible to completely mitigate the impact of urban runoff, the water that runs from the city streets to Tokyo Bay, and overflow wastewater.”

Hashimoto reported the water quality test results and other measurements in his article [see here]. “The report included the water temperature – that reached 31.5°C. Fecal E. coli levels were up to 7 times the standard set by the International Swimming Union which is why some of the swimmers reported that the water smelled badly, like a toilet. Other water quality parameters included measured values that exceeded acceptable level in terms of Chemical Oxygen Demand (COD) and transparency.

Hashimoto wrote, “Domestic wastewater, industrial wastewater, and rainwater flow into a single sewage system, purified at a sewage treatment facility, and then flow into a river. If a large amount of rainwater enters the sewer pipes at the same time due to heavy rain, it can exceed the treatment capacity of the sewage treatment facility, so the [excess] sewage flows to the river without being treated. Since it is a domestic wastewater, it naturally includes toilet water. Such river water flows into Tokyo Bay.

As a countermeasure, the Tokyo government and authorities continue to develop Tokyo’s sewage treatment facilities and installed underwater screens to capture and limit fecal coliforms into Tokyo Bay around the Olympic marathon swimming and triathlon competition venue.”

Illustration of the underwater protective screens in Tokyo Bay

The polyester underwater screens are 20 meters long and 3 meters deep and serve to block the sewage and filth that flows out to Tokyo Bay during heavy rains.

Heavy rains most often occur during the typhoon season. In Japan, the historical typhoon season takes place between June to October.

But July and August – when the 2020 Tokyo Olympic Games are scheduled to be held – are the months most prone to typhoons in Japan. That is, Tokyo is traditionally rainiest around the time of the Olympics.

As shown in the map on left, issued by the Japanese government, Tokyo Bay is filled with the water from the Edo River, Arakawa River, Tama River, and Tsurumi River. The massive volume of water comes from a wide range surrounding Tokyo central, including the surrounding prefectures of Saitama, Chiba and Kanagawa that includes millions of additional residents.

As Hashimoto points out, “When the rain increases, pollutants will collect in Tokyo Bay along with the water. Trying to stop these pollutants at the water’s edge does not provide a fundamental long-term solution.” 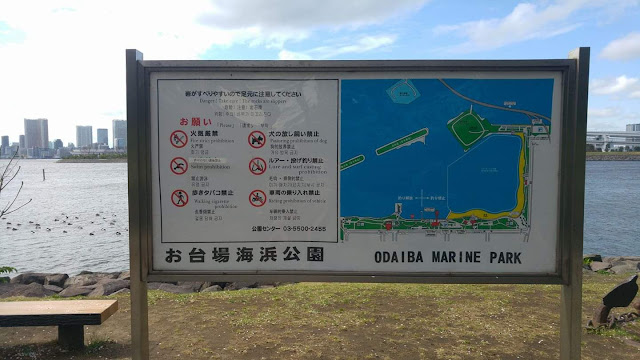