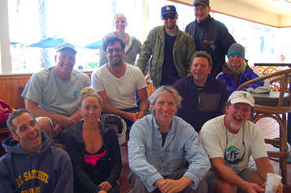 In the beginning, it was not easy.

Lyle Nalli recalls that evening, “It turned out to a magical night. But in the beginning, it was just a mess of sloshing waves hitting us from all kinds of directions. But two hours out, Hank [Wise] and Matty [Mitchell] let us know that we may be onto something big – they meant, the fastest crossing ever. And, as they predicted so well, the rough water sea transformed itself to a smooth, calm, peaceful lake.”

Escorted by captain Greg Wise on El Goofy with the support of paddlers Benjamin Landis and Matt Landis, Hank Wise, Lyle Nalli, Ted Bramble, Matty Mitchell, Parks Wesson and Lexie Kelly with pace swimmer Samantha Sears continued to churn in the turgid-turned-tranquil Pacific Ocean and crossed in 6 hours 53 minutes, landing on Catalina Island on the morning of October 8th. It was the fastest crossing on record.

The relay swim raised money for the charity – the Habitat for Humanity. Nearly 8 years later, the Guinness World Records will recognize and honor the team and its 32.3 km crossing at the 2019 WOWSA Ocean Fest held in Redondo Beach, California on October 5th.

Long Beach Swim Focus is among many Guinness World Record holders who will be honored and formally recognized at the 2019 WOWSA Ocean Fest in Redondo Beach, California on October 5th.

To participate in the WOWSA Ocean Fest and join in the Guinness World Records Celebration, register www.wowsaoceanfest.com.