Skip to content
Diana Nyad, Off-Broadway And Soon On Audible 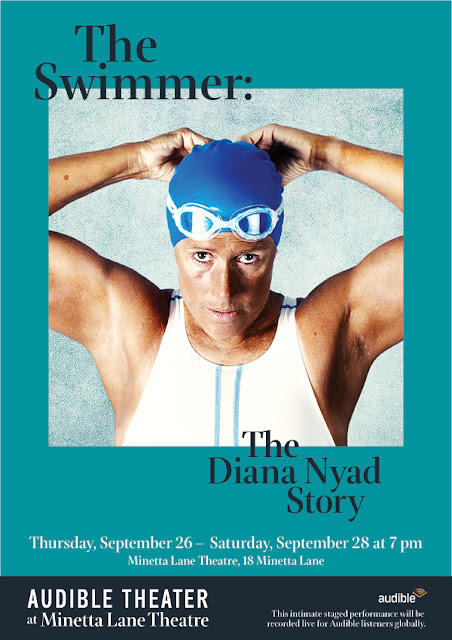 But few swimmers act on their own stage show.

Diana Nyad is one of those select few swimmers.

The Swimmer: The Diana Nyad Story was recorded live on September 26th – 28th at the Minetta Lane Theater in New York and will be soon made available to Audible listeners globally.

The stage show was recorded live as an Audible Original production starring Diana Nyad on her first Off-Broadway stage show where she told her personal perspective of swimming from Cuba to Florida without a shark cage. Directed by Jane Anderson, she shared her experiences, plans, backstory and motivations together with her trainer Bonnie Stoll during the 3-day show last month.

Comments from the audience included:

What a remarkable experience to see and hear this remarkable woman tell her story in the wonderful and intimate Minetta Lane theatre. Diana Nyad is an inspiration, but in this evening she also showed herself a direct and generous woman, anxious to share her life to encourage others.

Diana and Bonnie are tremendous storytellers and did a wonderful job of integrating video footage from the actual events with the portrayal of thought processes and techniques behind this inspiring, epic accomplishment. Diana Nyad is a storyteller for our generation.

I was on the edge of my seat, I laughed, I cried, I joined in audience participation and leapt to my feet when it was over. And, I had heard Diana speak multiple times over the past few years and had listened to her audiobook “Find a Way” before this next-level experience.

Dramatic and heartfelt and humorous. Diana is a natural storyteller.