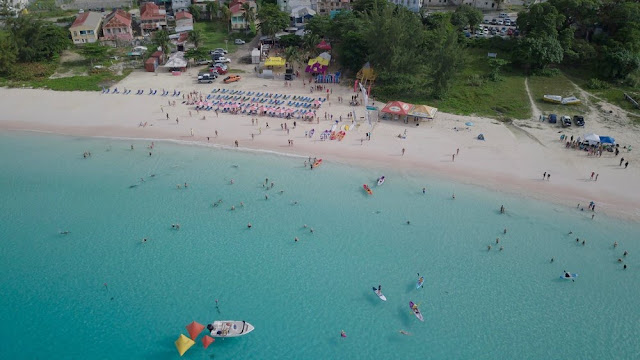 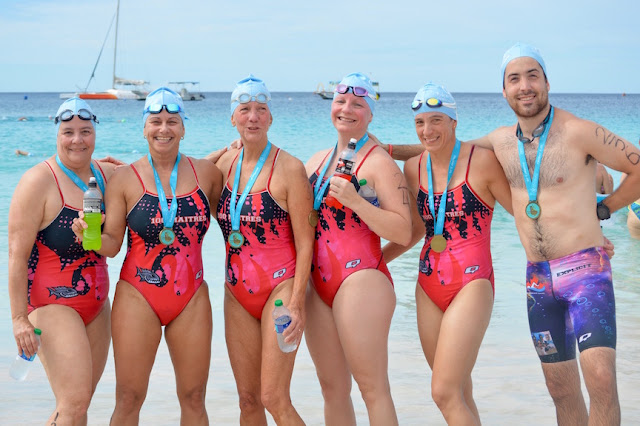 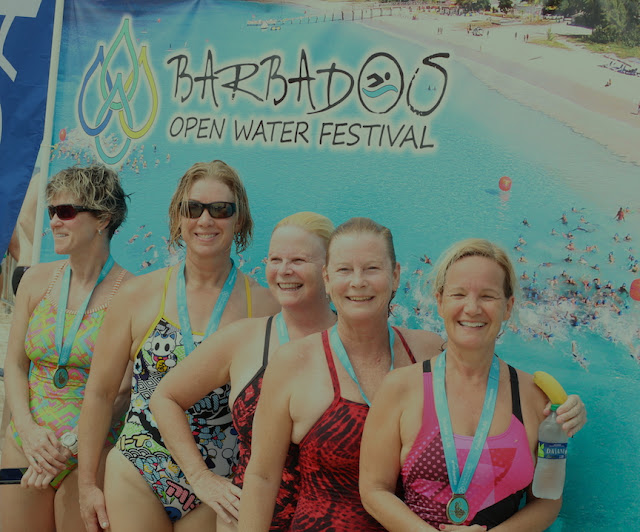 Kristina Evelyn reported, “It has been a landmark year for open water swimming in Barbados.

The Barbados Aquatic Sports Association (BASA) successfully hosted two major regional meets both with open water swimming races, a local charity took to the sea to raise funds through a well subscribed open water relay race, and most recently a local and traditionally “pool swimmers club” for juniors hosted a highly popular open water meet. In the midst of all this, endurance athlete extraordinaire Cameron Bellamy, used the island’s waters as his training ground throughout the year and then swam an unprecedented 151 km from Barbados to St Lucia to complete the longest channel swim in history.

And it’s not over yet. The fast-approaching: Barbados Open Water Festival will play host to open water swimmers from around the globe and serve as the finale for what may be the most outstanding year of open water swimming in the island’s history. 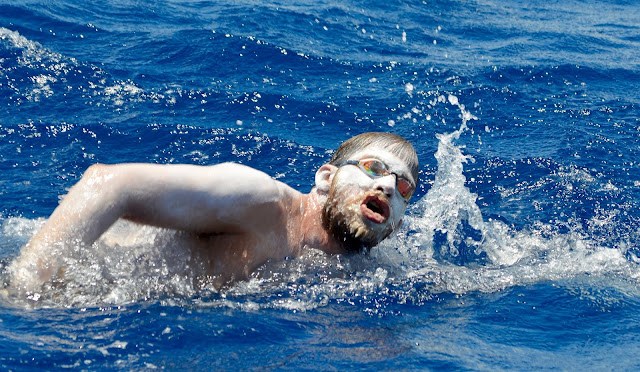 There is no doubt that the exploits of Cameron Bellamy [shown above] have provided a brilliant boost for swimmers on the island. In 2018, his #SwimAroundBarbados was tracked by thousands both physically as well as via tracker and social media. In an island where a large percentage of residents can’t swim, the epic swim generated much intrigue. Many former swimmers returned to swimming, inspired by the event and it is safe to say that many others had their fears of swimming in the sea allayed as they watched the incredible swim unfold.

Fast forward to 2019 and after being denied a swim attempt between Cuba and Florida, Bellamy swam 151 km from Barbados to St. Lucia in 56 hours 55 minutes supported by an awestruck Barbadian crew. It is an accomplishment beyond most people’s comprehension – how could it be possible to swim through 3 days and 2 nights? Bellamy will return to Barbados in November as a special guest of the Festival.

BASA, the governing body for swimming on the island, undertook the daunting task of hosting two regional meets in one year and only a few months apart: CARIFTA swimming in April and the CCCAN in July. Both had open water swimming components. Barbados entered its junior open water swim teams in both meets and had some success at CARIFTA level with two Festival swimmers, Diego Dulieu and Eric Lashley claiming gold and bronze respectively in the 5 km race in Carlisle Bay. The 2019 CCCAN saw pool swimmers, open water swimmers, water polo players and artistic swimmers from 8 to 18+ years old from 24 countries across the Caribbean and Central America arriving in Barbados for a highly competitive meet in the multiple disciplines. Open water swimmers swam 3 km, 5 km and 10 km races. Conditions were tougher than usual with gusty winds and currents in the usually tranquil Carlisle Bay.
Mexico, Honduras and Guatemala were top three in medal count for the open water races.

In addition to the regional meets, the local Variety Club, the Festival’s Charity partner, incorporated an open water swimming event into its Annual Row for Charity fundraiser schedule in June, and more recently Pirates Swim Club, a local pool swimmer’s club hosted an open water meet. Both events had about 100 swimmers.

The local open water community is definitely flourishing. Swimmers of all ages are visible daily, up and down Carlisle Bay and with many young swimmers joining the open water ranks the future seems bright for the sport on the island. It is a vibrant and friendly community who warmly welcome visiting swimmers year-round. 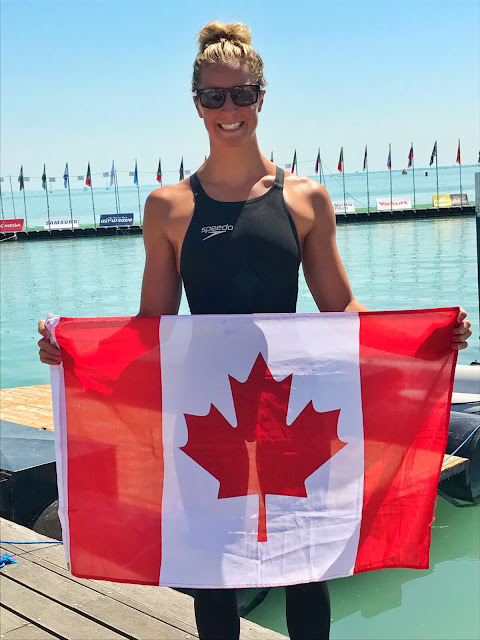 Many Canadians are expected on island including three-time Olympian Steph Horner [shown on left].

The Pan Am medalist is the first Canadian female to win an FINA World Cup event, is a prospect for the 2020 Tokyo Olympics, and is currently in training at the High-Performance Centre in Victoria, Canada. She will make her first appearance at the Festival this year and will swim in the 1.5 km and the 10 km races.

In this Year of the Canadians, Mark Perry, Swimming Canada’s Distance/Open Water Coach, will accompany 24 open water swimmers hailing from all across Canada. The FreeStyle Experience, a growing Canadian group of returning regulars will make their fourth visit.

Joining the Canadians will be recreational swimmers of all ages and abilities from 20 countries as well as special guests: Cameron Bellamy and Jaimie Monahan, a well-known marathon swimmer and Queen of the Ice Swimming World.

As usual the Festival will kick off with three days of practice swims followed by two days of races: 1.5 km, 3.3 km, 5 km and 10 km. Highlights will include professional timing by Sportstats, the usual festival beach party atmosphere with live steel pan music on the beach, unique redesigned commemorative finisher medals, winner medals in multiple age categories and numerous random prizes. The event is scheduled for November 6th-10th.”