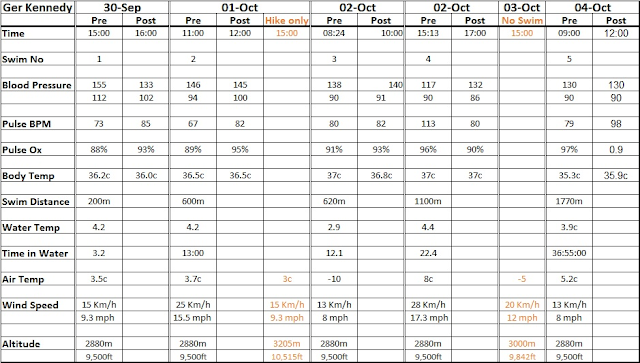 Ger Kennedy knew his last Ice Mile was going to be difficult – but he was physically, psychologically, logistically and emotionally prepared for the challenge.

His ultimate goal was to become the first man and second person after Jaimie Monahan to achieve the Ice Sevens, but he chose a particularly difficult venue to do so. The sea-level-living Dubliner swam a high-altitude Ice Mile at 2,880 meters (9,500 feet) in the lake in Portillo, a ski resort located high in Chile’s Andes mountains in the Valparaíso Region. “For me, this is the next level in Ice Swimming – at altitude.

With only 71% of the oxygen available at sea level, Kennedy had five days to acclimatize for the Altitude Ice Mile.

Over the five days of training at the Ski Portillo, the water temperature in which Kennedy acclimated ranged from 2°C to 4°C with the air temperature ranging from -10°C to +9°C. He swam a total of 4.3 km over 1 hour 28 minutes during the five days leading up to his 12th career International Ice Swimming Association-ratified Ice Mile.

The 49-year-old Kennedy explains, “While at altitude in South America, we performed medical tests on both myself and Ger Devin to study the different effects. Dr. Nicolás Bunster from Santiago, Chile assisted us with these tests.

My previous experience in altitude training over the past 3 years include altitude swimming at 2000m and hiking at 5000m.”

Swim 1 – Just after long flight from Ireland to Chile
“It was a tough swim to experience the difference between 15°C [in my native Ireland] to 4°C water in Chile. My fingers became swollen and painful.“

Swim 2 – I struggled with breathing with altitude
“I started planning and after a recovery in bed, I felt all right, but my fingers remained swollen. Then I did a 25-minute hike at 3200m.”

Swim 3 – Tough conditions with ice present on the surface of the water
“I had kayak support in place and had to adjust the course to a longer distance of 260m prior to the turn. I stopped a number of times to avoid ice cutting my head, but I had no issue with recovery.”

Swim 4 – This was the first swim to exceed 1.1 km
“My breathing was good with a steady stroke rate. An offshore wind was in my face on the way back, but I felt in control. My recovery was good as was the pre-planning, a hike up slowly on loose rock track. At the Chalet, I got into bed as planned, but I found my recovery in bed to be difficult with extreme shaking for about 20 minutes. After 40 minutes, I returned to normal body temperature.

Swim 5 – Swim of 1.75 km
“My breathing was good with a steady slow stroke rate in 3.9°C water, 5°C air and 15 kmph. I felt in control, but was worried about swimming faster. My recovery was good until as pre-planning – I hiked up slowly with assistance from Ger and Jorge with Dr. Nicolas present.

At the Chalet, I got into bed as planned, but I found recovery in bed to be difficult with extreme shaking for about 20 minutes. The recovery was complete as the doctor checked my vitals. I had a high pulse, but my blood pressure was normal as was my pulse oxygenated. I later went back to the swim course in order to assist other swimmer.”

53-year-old Ger Devin is a 2018 English Channel swimmer who is generally a strong open water and pool swimmer with some ice swimming experience including an Ice Kilometer in 1.5°C done in Poland. His previous experience over the past 3 years at altitude included skiing at 2500m but no high-altitude swimming.

Swim 1 – Just after long flight from Ireland to Chile
“It was a tough swim to experience the difference between 15°C [in Ireland] to 4°C water in Chile.“

Swim 2
“He tried to swim longer, but felt suffocated by the high altitude and had to breaststroke with his head up.”

Swim 3
“His target was to swim 100m, but again he felt suffocated by the high altitude while doing front crawl and had to breaststroke heads up.”

Swim 4
“He felt a lot better swimming front crawl, but it was still a struggle.”