Skip to content
Sid Cassidy, A Lifetime Of Giving And Receiving 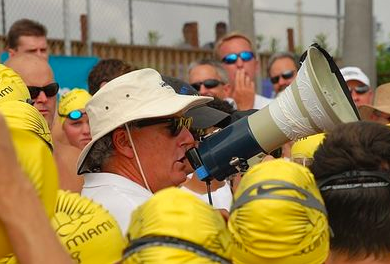 Sid Cassidy, A Lifetime Of Giving And Receiving

Sid Cassidy is the 2020 recipient of the Irving Davids/Captain Roger W. Wheeler Memorial Award for his contributions to the administration of open water swimming.

As a swimmer, Sid achieved a 4th place world ranking in 1979 under the auspices of the World Professional Marathon Swimming Federation, and was part of a record setting English Channel double crossing relay in 1991.

As an administrator, Sid has been a leader of the sport since 1982 when first named to USA Swimming Open Water Committee. Over nearly four decades, he has been a USA National Team Coach; USA Swimming Administrator; FINA Technical Open Water Swimming Committee member; FINA Swimming Safety Task Force member; Olympic official, race announcer, race director, and strong advocate of the sport. Cassidy has done nearly everything there is to do in the sport.

He is also part of the team with Chris Guesdon and Dennis Miller credited with developing the strategy to have a marathon swimming event included in the Olympic Games which happened in 2008.”