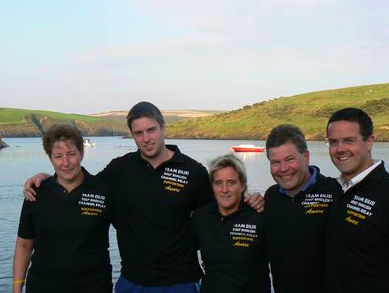 Imelda Lynch was among a number of Irish luminaries voted into the Hall of Fame – Marathon Swimming Ireland in its Class of 2020.

Lynch was recognized as an Honor Contributor (Crew) for her crewing for 7 different English Channel solo swimmers from 2006 to 2010 including Lisa Cummins‘ two-way crossing of 35 hours. She also crewed for other solo swimmers including Stephen Redmond’s swim from Fastnet to Schull.

She is also a successful marathon swimmer with a 14 hour 35 minute crossing of the 33.5 km English Channel in 2005 and a 7 hour 5 minute crossing of the 14.4 km Strait of Gibraltar. She was a member of a 4-person English Channel relay (shown above on the far left together with Patrick Sheehan, second from left, Coach Eilís Burns in the middle, Oswald Schmidt, second from right, and Eddie Irwin on the far right), a two-way English Channel relay, and the first person to complete a 23 km swim from Bandon River to The Dock to Speckled Door, together with Danny Coholan.

The formal induction ceremony to honor Lynch will be held on February 29th 2020 in Kinsale, Co. Cork in conjunction with the Irish Long Distance Swimming Association Awards (register here).