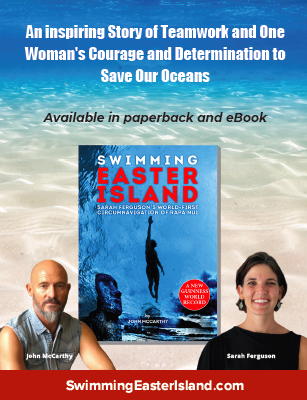 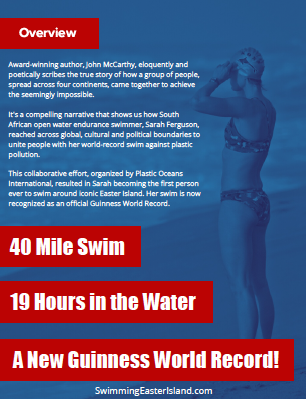 But Vergara’s pioneering swim enabled Ferguson to step into history which she did on March 16th 2019 after 19 hours 8 minutes.

“It’s a swim that folklore draws from and I had to tell that story,” said McCarthy.

Ferguson’s challenge was part of Plastic Oceans’ Swim Against Plastic campaign. She endured jellyfish stings and overcame breathing problems related the high salt content of the water in the South Pacific. “Having spent most of my life on or near the ocean, I’m passionate about its conservation and solving the problem of plastic pollution,” said Ferguson. “This swim’s goal was to raise awareness on the issue and ultimately inspire others to rethink plastic. I think we achieved that and I believe John’s book is an extension of that experience and effort.”

Swimming Easter Island is the first book published by Plastic Oceans that dedicated to using all forms of media to inform, incite and inspire a movement to rethink plastic. “It’s an inspiring story of courage, determination, and environmental activism,” said Julie Andersen, Global Executive Director for Plastic Oceans. “It shows how the passion and drive of one woman was able to reach across global, cultural and political boundaries to unite a variety of people and organizations in her swim to raise awareness about plastic pollution.”

The book is available in paperback and eBook formats, and can be purchased at www.SwimmingEasterIsland.com or www.PlasticOceans.org.

Ferguson took part in her first ocean swim in Hawaii in 2011 where she made her decision to do something meaningful with her swimming. Since 2012, she has been competing in and pioneering ocean swims in and around South Africa and abroad to help raise awareness of single-use plastic pollution. 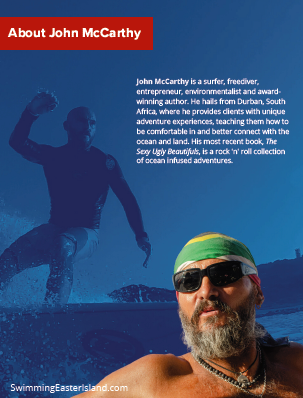 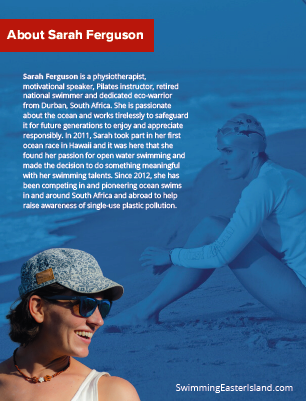