Skip to content
Mary Margaret Revell’s Romance With The Water

Disney recently reached out to 80-year-old Mary Margaret Revell Goodwin because they are interested in making a movie based on her life.

Revell’s travels and experiences have been totally off script.

Her parents did not want her to be a competitive swimmer, so she took to the open water. In 1962, the 24-year-old who had established the Mary Margaret Revell Enterprises, Inc. with offices in Detroit and Miami said, “My only romance is the water. It’s true. It’s my business to make physical fitness your pleasure. I’m a fanatic on physical fitness. I am sup every day at 5 am and swim at least four hours daily. I am careful about what I eat. I concentrate on fish and salads – never any meat or naughty things like eclairs or strawberry tarts. I don’t smoke or drink. I like men. But if they take me out, they have to have me home by 9 pm.

Later in her 30s, she worked for the Pentagon and helped direct the Navy’s first Environmental and Conservation Office. In her 40s, she took up long distance running and ran 3,000 miles across the Himalayas, Japan and Great Britain.

She also edited a magazine, made BBC documentaries, wrote a children’s book, raised sea otters while living in London, and became a historian in Maryland. 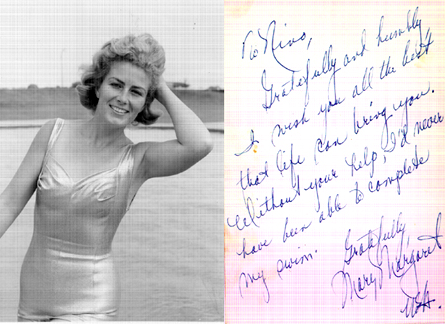 While she was living in London, she found her way to Israel. “Oh, I heard about the Sea of Galilee when I was a child and I have always longed to swim and to cross it,” said the then 27-year-old in 1964 about her 22 km crossing from Capernaum to Zemach. “The Sea of Galilee is known throughout the world as a challenging endeavor to succeed and long ago I wanted to face this challenge.”

Her talents and ambitions had taken her to London and across the globe.

She self-financed and made plans to swim all over Europe, Asia and Oceania – with records on her mind. She attempted swims in South Africa, Italy, Spain, Poland, Japan and New Zealand. Before the Internet era, she wrote children’s books and wrote newspaper articles about her swims that enabled her to continue funding her expenses to travel around the world in search of her swimming goals.

She spoke of her Catalina Channel crossing, “On my very first attempt, I was lost at sea. This caused a major U.S. Coast Guard search during the night, headlines in the Los Angeles papers, the start of lots of gray hairs for my parents, and a very tough return to land.

I ended up saving myself at 5 in the morning by climbing a huge cliff and going grease covered and barefoot through very prickly tumbleweeds to the luxury home of a millionaire living on a bluff in Palos Verdes overlooking the channel. I rang his door bell to ask him to call the authorities, shocking the poor man by waking him to such a starkly weird sight so early in the morning.”

In 1962, she experienced a more traditional crossing of the 14.4 km Strait of Gibraltar, finishing in 7 hours 13 minutes at the age of 24. She also made several attempts of the English Channel before setting off on a 22 km crossing of the Sea of Galilee in Israel in October 1964. She recalled being nervous about its warm waters. She knew what she was about to face as she had already completed a widthwise crossing of the Sea of Galilee in her training. “The Sea of Galilee is difficult to succeed because its waters are too hot. That’s why it’s also the first time I can’t predict the time I will need to succeed. Usually I can say with almost complete accuracy the swimming time I need to go at a certain distance, but here I have no idea.

But, on the other hand, the Sea of Galilee is warm and pleasant for swimming because it has no winds and storms, no waves and swirls and certainly no predatory fish.”

Revell certainly knew about adventure. She recalled the time she was in Turkey. “When I went for a swim around the Dardanelles , we had to travel 7 hours on back roads all the way to the swimming spot. After the tedious ride, we reached one village and I felt the need for a bath without which I could not swim a single mile.

All the villagers gathered around me because until then they had not seen a girl wearing shorts. After the first surprise, they held when they heard my wish, the villagers went and brought a large bowl of hot water. After the bath, I asked for the water to be poured, but they laughed and said, ‘For what should we pour out the water? Then when you return after the swim you will probably want to clean yourself of the grease that smears on your skin, it is better to leave the water, because it is a pity to just pour it after just one wash.‘”

Revell was the third woman to swim across the length of the Sea of Galilee, following Malka Tenenbaum (9 hours 20 minutes) and Edna Bornstein (9 hours 40 minutes) in 1954. She finished in 9 hours 39 minutes after starting at 9 pm, overcoming three severe stomach aches and finishing in the morning at 6:39 am. 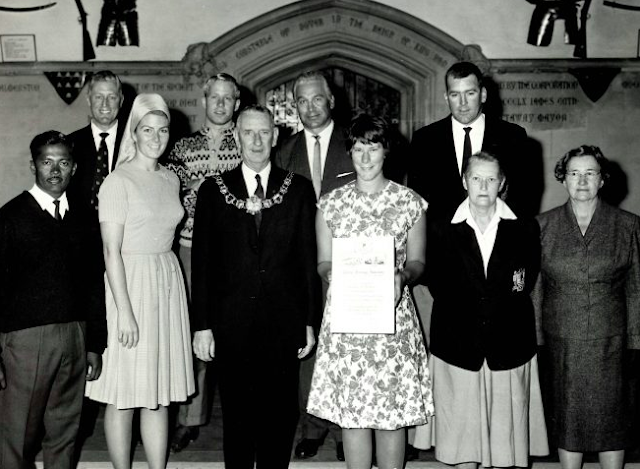