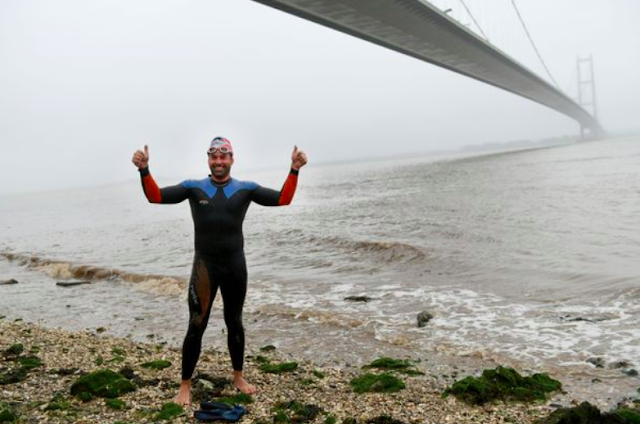 After swimming 12 km in the North Sea from the Principality of Sealand to Felixstowe on UK’s east coast in August 2018 [see video below], British swimmer and former water polo player Richard Royal then completed the first two-way 3.7 km solo widthwise crossing of the River Humber.

He explained the unprecedented 3.7 km course in the North Sea inlet on the east coast of England on July 27th as he swam near the Humber Bridge, “I started on the north bank and swam to the south bank and back again.”

He raised money for Humber Rescue in the charity swim [see here]. “Humber Rescue is a fantastic independent charity of volunteers which has kept us safe by providing fast-response search and rescue operations in the Humber region for nearly 30 years. It is entirely dependent upon donations to continue supporting this vital service.“

According to Humber Rescue, it is the second most dangerous navigable estuary in the world after the Orinoco, in South America. With currents anything up to seven knots and sandbanks that can change almost daily.

Royal said, “[The two-way crossing of 1 hour 13 minutes] was a lot more difficult than expected. You do everything you can to plan and make sure you choose the right date and time, but actually you cannot predict the weather. The waves were a lot bigger than I thought they would be, and it was choppier too. On the way going out I was trying to swim in one direction, but being taken in the other.”