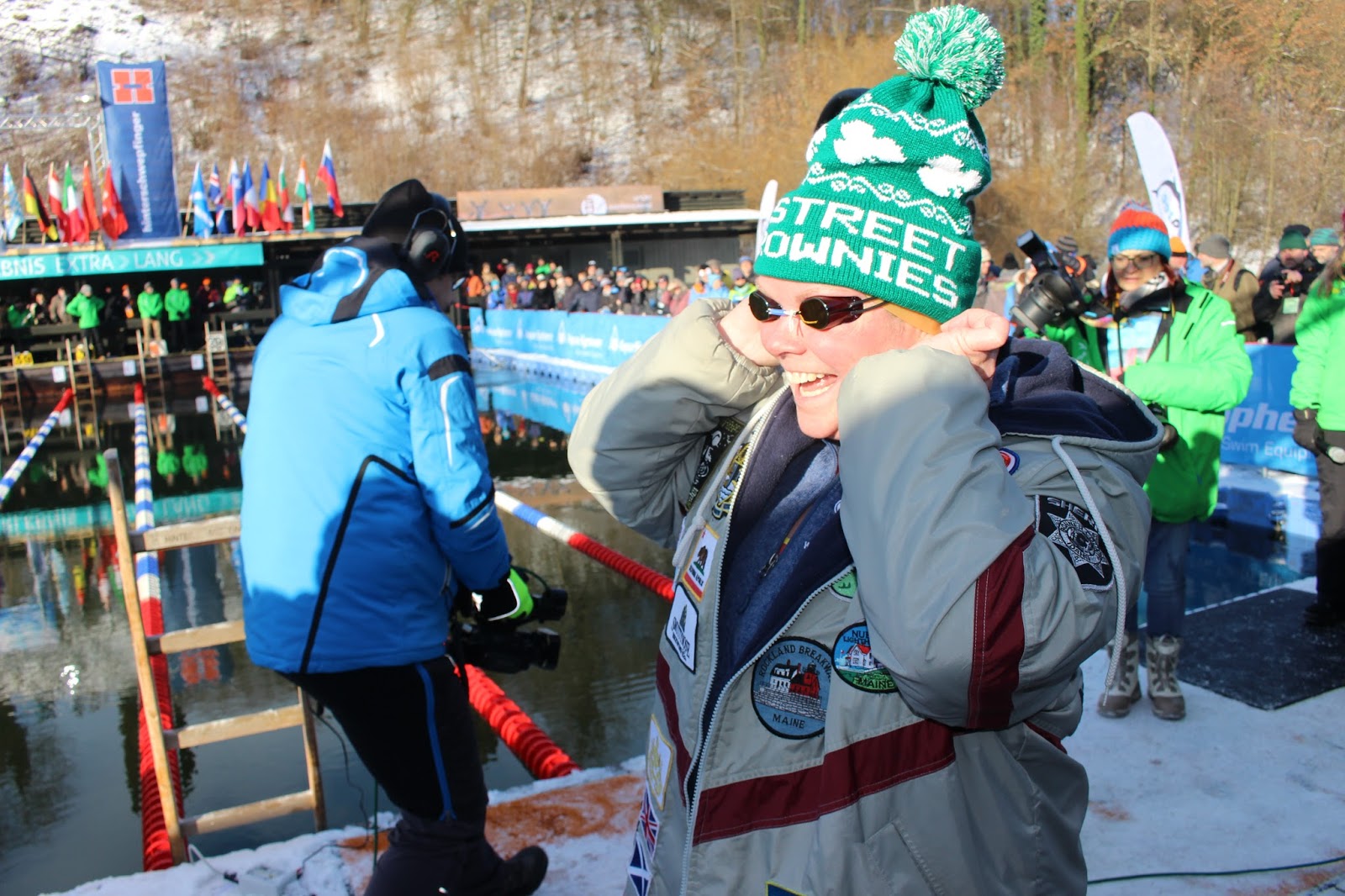 From Captain Matthew Webb and Gertrude Ederle to Sarah Thomas and Ross Edgley, Elaine Howley is among open water swimming’s most prolific writers and foremost historians. Howley promotes open water swimming, its history and its luminaries in a highly educational, easy-to-read manner via her numerous articles in leading swimming publications.

In addition to her extensive research on each subject and the sport, Howley is herself an accomplished channel swimmer, marathon swimmer, ice swimmer [see below], winter swimmer and escort crew member. Each of her swims and roles gives her an introspective and profound berch to describe swimmers and the sport to both veterans and newcomers alike.

In 2019, these are examples of the considerable scope of her work:

Outdoor Swimmer:
* December: Million Dollar Mermaid, a profile of Annette Kellerman
* November: The Men in Between, the history of the swimmers who crossed the English Channel after Captain Webb and prior to Gertrude Ederle
* October: The Other Side (cover story) about Sarah Thomas’ 4-way English Channel crossing
* October: History feature titled Master and Commander, a profile of Commander Gerald Forsberg
* September: The Liffey Swim, a history of Ireland’s oldest open water swim
* August: Hungry Like the Wolff, a profile of Jabez Wolffe
* July: Famous Fraud, a historical look how Dorothy Cochrane Logan’s hoax English Channel swim led to the development of the Channel Swimming Association
* June: A Wet, Winding History, the history of swimming in the Thames
* May: Tahoe Blue, the history of swimming Lake Tahoe
* April: The Siren’s Call, the history of P.T. Barnum’s Feejee Mermaid and mermaid/open water culture in the Victorian/turn of the century era
* March: Of Strongmen and Stunt Swimming, an exploration of stunt swimming in the open water from Jack LaLanne to Ross Edgley
* February: The Lady Champion Aquatic, a profile of victorian swimmer Agnes Beckwith
* January: Chairman of the Rivers, a history of Chairman Mao Zedong and his lifelong love of open water swimming

SWIMMER Magazine:
* November/December Out in the Open: The Importance of Swim Buoys When Training, about how to use a tow float when training
* November/December Splashback: How One Woman Changed the Sport of Swimming, the history of Charlotte Epstein and the Women’s Swimming Association
* September/October Out in the Open: Diff’rent Strokes, about how you can use strokes other than freestyle in the open water
* September/October Out in the Open: Descent into the Maelstrom about Edgar Allan Poe who was an avid open water swimmer
* July/August Out in the Open: In Hot Water, on strategies for coping with water that is too warm
* July/August: The First Family of Australian Swimming, the famous Cavill Family
* May June Out in the Open: Drafting in Open Water Races, about how to hitch a ride
* May/June: Cutting Drag, a history of women’s swimwear with heavy focus on Annette Kellerman and her innovative suit
* May/June Swimming Life: Back to Swimming, a profile of Trent Theroux who swam to Block Island using only backstroke
* March/April Out in the Open: Different Strokes about how to change your technique to suit conditions in the open water
* March/April: The English Channel Pace-Setters, the history about the first Americans to swim the English Channel
* March/April Feature: In the Age of Greatness, cover story on Pat Gallant-Charette
* January/February Out in the Open: Executing Tight Buoy Turns
* January/February: A brief history of timekeeping, includes references to Mercedes Gleitze and Rolex’s involvement with English Channel swimming
* January/February Feature: Jump in for a National Championship, an annual event preview piece about upcoming open water and pool swimming National Championship events

USMS.org:
* Sarah Thomas Completed Historic Four-Way English Channel Swim
* How to Cope with Water that’s Too Warm
* The Mighty Mermaids Keep Ruling the Waves
* From the Pool to Open Water
* How to Execute a Tight Buoy Turn

Lucent Magazine:
* Making a Splash, a profile of Marcy MacDonald on her induction to International Swimming Hall of Fame

NELMSC.org
* Drowning the Demons: Could Swimming Be a Viable Cure for Depression?

She has also published articles in the following articles on a wide variety of topics and areas:


Howley has been featured or measured in the Daily News of Open Water Swimming in several occasions over the last 9 years:

For more information about Howley and her work on behalf of the global open water swimming community, visit www.elainekhowley.com.