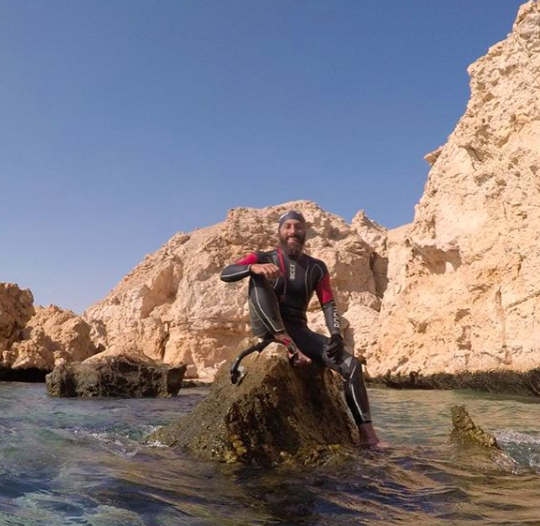 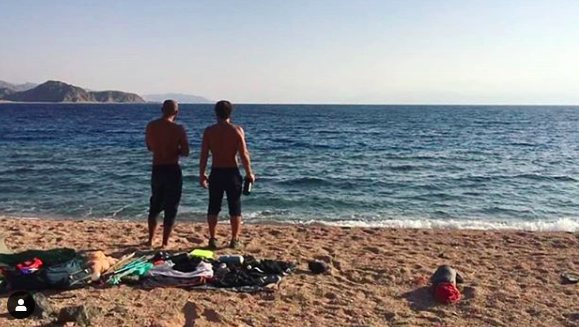 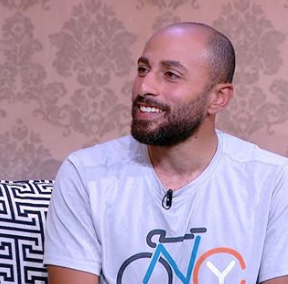 Omar El Galla Experiences An Adventure Of A Lifetime In Sinai

Omar El Galla does the extreme. The Egyptian cyclist, runner and open water swimmer put forth another massive challenge and planned on swimming the length of his native Egypt.

He had already cycled 6,500 km around Egypt in 65 days and completed a 1,500 km stage run in 36 days along the Nile River from Abu Simbel to Alexandria. After completing those that extreme ride and ultra run, he set off on planning a solo stage swim attempt across the length of Egypt.

He assisted stage swim was to swim along the Red Sea coast from Suez to Shalateen.

Omar ended up having to postpone his Red Sea stage swim until spring 2020 due to some unforeseen delays. Instead, he swam the length of the Gulf of Aqaba in the Sinai Peninsula from the north at Taba to the south at Ras Mohamed.

He described his adventure. “I ran into some bureaucratic challenges regarding securing the necessary permits for the sailboat that was going to support me during the swim. It was supposed to take 30 days. But I just kept being told, ‘You’ll get it the next week’ by the authorities until I finally got it in mid-November 2019. Meanwhile, I kept postponing the start of the swim from September 1st to September 15th and then to September 21st before finally having the sailboat withdraw from the project – as there was no longer a concrete date on when I would be able to start. The boat captain had to take other bookings and honor booking they already had scheduled starting in mid-December. So with winter approaching, I had no idea when I would get the permit and having just lost my support sailboat, I made a decision on what to do next. After taking a week to think, I decided I already prepared for a long stage swim and if I was going to postpone until spring 2020, might as well do something now.

I decided I was going to swim the length of the Gulf of Aqaba in Sinai from the north at Taba to the south at Ras Mohamed the following week with almost no planning and without the support of a boat. I was going to rest, eat and sleep on the beach along the way instead.

I called my friend Nabil Rostom who was already part of the original support boat crew. I told him the plan and told him I needed his help to be my land support, carrying my clothing, camping gear, food and water along the coast. In a week, we prepared our stuff and stuffed them in a huge backpack, and then took a bus to Taba.

After a hiccup on the second day when we were pulled aside by authorities suspecting that I was a smuggler sneaking through the border. [Note: There are 4 countries within less than 5 miles from Taba in a not-very-relaxed area of the world, and to be fair I looked very suspicious wearing a full swimsuit, and dragging a storage/safety buoy behind me.]“

Omar managed to swim 220 km, the entire length of the Gulf of Aqaba, in a 34-day period last month. “We had 26 swimming days with 8 days off due to the logistical challenges and preparations needed to pass some areas.

We wild camped by the beach when we had to, were hosted at many eco-lodges along the coast, providing us with food, water and a place to sleep. We were even hosted at a 4-star resort at Sharm El Sheikh. During a 60 km stretch between Nuwaibaa and Dahab, we were without a phone connection; there were no road or services, or did we have any chance of restocking on food and water. The mountains are so close to the sea that there was no room to build a road, plus it was a natural reserve.

We called for help from some of our friends and with the help of two camels they hiked while I swam for 6 days, relying on the camels to carry our supplies. We could have used 4-wheel cars, but in keeping with my goal of bringing awareness to the problem of plastic waste at sea, we thought it would be better if I could finish with almost zero carbon emissions.

We did cook using a camping gas stove or by making fire from wood collected by Nabil while walking along the coast, we also stayed at a 4-star resort at Sharm El Sheikh. Plus, the cars would have made it as far as 10 km away from Dahab, as the last 10 km the mountain went straight down to a drop off at sea, so people and camels using land had to take a mountainous path that cars cannot have passed through.

During another 30 km stretch between Dahab and Nabq, also without a phone connection or any services or places to resupply, Nabil and another friend hiked with our supplies along the very narrow mountainous path between the mountain and the sea while I swam. It was even more narrow than the one between Nuwaibaa and Dahab where we used camels to carry our supplies. This time, we could not even use camels as they would not be able to get through some of the rocky climbs. We ended up spending a day more than expected due to me swimming fewer distances daily due to bad sea conditions, so we ran low on supplies.

We eventually got some water from a diving safari boat passing by. We also had to cook with sea water in order to conserve our drinking water and had to be a bit inventive with rationing the meal portions between us and mixing the ingredients needed to get the nutrients in my body that I needed to perform disregarding how the food tasted or if it really filled up my stomach. An example of such a meal was a breakfast of olive oil, protein powder, water, black seeds and one sweet potato shared between the 3 of us. It all eventually worked out and later during that day, the guys ran into a military outpost while I was swimming and they generously refilled our water and gave us some food. All along the way, people were so generous that we did not have to pay for any accommodations and rarely paid for food and water, even the camels were paid for by our friends.

All in all, we paid something like 3,000 EGP between me and Nabil, my land support guy during the swim including transportation from Cairo, which is equal to US$190, which is around US$3 per person per day.

I also had 10 different people swim portions of the distance with me, ranging from 1.5 km to 17 km (the 17 km was divided over several days), with the maximum someone swam with me in one day being 12 km by Patrick Scott, a former editor at the New York Times who spent a day with me and is currently writing an article about the swim for Outdoor Swimmer Magazine. Of course it wasn’t always plain sailing, my phone pouch leaked during the last week causing me to lose a lot of video evidence form the swim along with some nice photos and all my diaries. I recorded some video evidence on my phone and some more on my GoPro which I still have. I managed to collect more photos and video evidence from people I encountered during the swim to make up for the ones lost.

The format of my video evidence was very specific, showing the day, date and time form my watch or phone, the area I was at, and the exact GPS coordinates, I thought might as well have the evidence on video besides the entry logs on Google sheets which I still have. But with those videos lost, I can’t really make up for them from the videos I collected from other people.

To be more specific, I now have video evidence although not from everyday, I have all other data on Google Sheets, I have some swims (minus around 5 days where my phone battery died in the middle of the swim) recorded on Strava, and I have witnesses from almost everyday people we encountered and from the places we stayed. I have to also say that I originally planned to swim wearing a Garmin watch to record daily stats, but I ended up wearing an US$8 Kalenji watch from Decathlon that was waterproof and only has a stopwatch and tells the time. I bought the Garmin watch on a hotel address in New York because we did not have them here in Egypt, and a friend of mine who was on a trip to New York was supposed to get it to Egypt on his way back, but the delivery was late and he ended up leaving without it.

A couple of weeks later, I had someone else go ask for it but the guys at the reception informed him that they returned it, but the website says it wasn’t, so I kind off lost around US$700. By then, I already started the swim, so I didn’t really have the mental capacity to find an alternative or a solution.

It goes without saying that it was a wild adventure more than anything else. It turned out to be an experience of a lifetime. At one point after reaching Ras Mohamed, we had a plan to cross the Gulf of Suez to El Gouna, (Sinai to mainland Egypt, or Asia to Africa) before continuing to Shalateen (all the way to the south). But with winter now upon us, and with us running low on funds and with the plan of the crossing being borderline illegal and a bit dangerous having to cross a 6 km shipping highway full of cargo ships going to and from the Suez Canal (but the way it was planned and the level of planning we did helped by an expert diver always looking for wreck dives in this area, with it being his backyard for the past 20 years, and with the coordination and support given to us by small fishing boats operating in that area, we were very confident it was doable), cooler heads finally prevailed in a debate to continue with the adventure versus doing the originally planned swim in the spring of 2020.

My only regret was not taking this once-in-a-lifetime chance to cross the Gulf of Suez, but we also already risked a lot already, were not really good at sharing with everyone the daily details of the swim like we wanted, and we didn’t really succeed in spreading awareness on the plastic waste problem like planned as we were barely dealing with the day-to-day challenges and logistics of securing food, water and shelter.

In the end, I am glad things worked out the way they did after all and now using all the experience gained from the Gulf of Aqaba swim, I am going to start swimming the length of Egypt from Suez to Shalateen like originally planned sometime in the second half of March 2020. This time I am hoping to average no less than 10 km per day, preferably no less that 12 km per day, and ideally at least 15 km per day. Also now with more experience, I intend to better record all the data needed to verify the swim.”

Omar can be followed @omarelgalla.