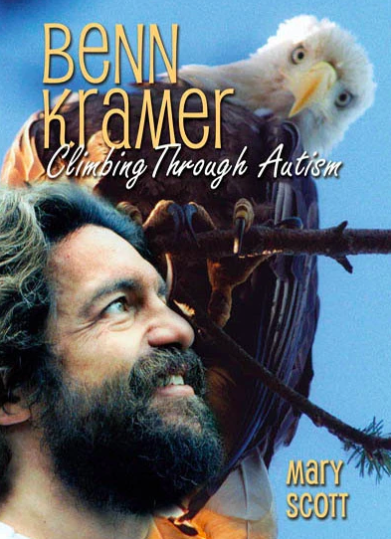 In British Columbia in the 1970’s, Benn Kramer was often found observing and photographing the eagles that were resident on his father’s property.

The young man proved himself a true adventurer in the water, caves, mountains all over the world.

According to Mary Scott in her 104-page book Benn Kramer: Climbing Through Autism, Kramer became fascinated with the eagles that nested on their property and campground on Hornby Island in Canada’s westernmost province. “He set up a treetop feeding station to ensure they had enough to sustain the eaglets they produced each year. He even constructed a sleeping platform high in the tree in order to watch the birds and to see the world from their perspective.”

Scott is a Canadian psychotherapist and eagle chaser who has long been curious about autism. She explored the challenges of autism through the life and adventurous lifestyle of Kramer. She followed his footsteps in Canada, the United States, Peru and elsewhere curious and fascinated by the remarkable young man who seemed to have no boundaries or limitations given his autism, a serious developmental disorder that impairs the ability to communicate and interact.

But Kramer interacted with Mother Nature by swimming, skiing, climbing, cave diving, hiking and running in ways that few humans have had the opportunity to do so.

Scott’s book, published in 2013, includes 156 photographs about Kramer’s adventures and interests that were unrestricted by the lot he had been given in life. Kramer eventually circumnavigated Manhattan Island 13 times.

Independent and able to acquire a number of new skills, the overcame his condition, learned to talk, and to manage himself well in society. Ultimately, he became an adept wildlife photographer and made friends wherever he went including dozens of swimmers who competed with him in 13 Manhattan Island Marathon Swims. Scott writes, “While people noted his direct approach and mode of speaking, many people were unaware of his autism and accepted his bluntness and unique behaviors unconditionally.

When Kramer was in his late forties, he met a young autistic woman to whom he became engaged. He was looking forward to married life when he was killed in a climbing accident near Winnipeg, Manitoba in October 2005 at the age of 49.”