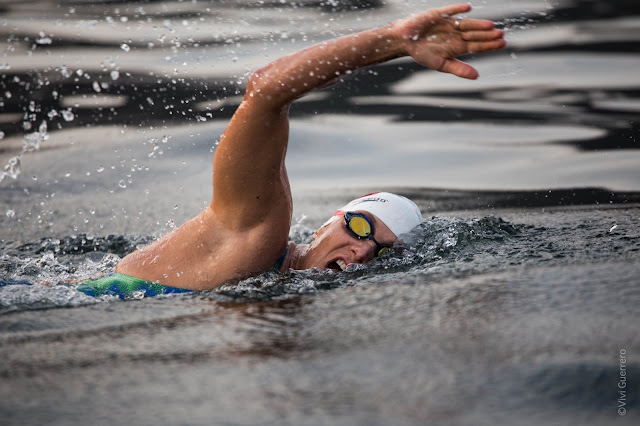 The WOWSA Awards are an annual selection of outstanding individuals and offerings in the following categories:

The 2019 WOWSA Awards winners are selected by the public in a global online poll where one vote is allowed by one computer/one person. A total of 63,583 votes were inputted and determined the following winners:

And these nominees are only the tip of the iceberg in terms of all the heroes and heroines in the sport of open water swimming that includes stage swimming, relays, charity swimming, winter swimming, professional marathon swimming, channel swimming, ice swimming, eco-swimming, wild swimming, adventure swimming and mass participation events.

There are so many iconic and inspirational swimmers in the sport from Sarah Thomas, who completed the first four-way English Channel solo crossing, to Cameron Bellamy who pioneered a 56 hour 55 minute swim from Barbados to St. Lucia in the Caribbean Sea.”

The nominees included Olympic gold medalist and leukemia survivor Maarten van der Weijden who raised the most amount of money of any solo swimmer in history to 82-year-old Mally Richards who has participated in 66 SPAR River Miles during his lengthy career in South Africa. 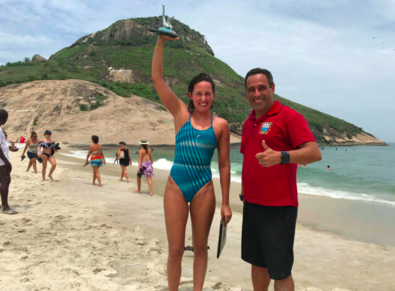 But votes came pouring in from all over the world as they honored Adherbal Treidler de Oliveira [shown above with Betina Lorscheitter] for not only surviving a scary shark attack, but also administering, promoting and organizing the 36 km Travessia do Leme ao Pontal Crossing along the coast of Rio de Janeiro.

Voters also recognized the feats of Mexico’s Mariel Hawley Dávila, an author, widow, attorney and motivational speaker has not only raised money for Quiero Sonreír in order to fund surgeries for children with cleft lips and palate, paying for oncological treatments for children with cancer, working with women in jail, and promoting health via Mexicanos Activos, but she also achieved the Oceans Seven with a 23 km Cook Strait crossing in 11 hours 45 minutes and completed a 32 km Los Cabos Open Water Acuarium in 10 hours 14 minutes in Mexico and published her first English-language book Like the Heart of the Sea: Always at Peace after completing her initial book, Días Azules about her marathon swimming exploits. 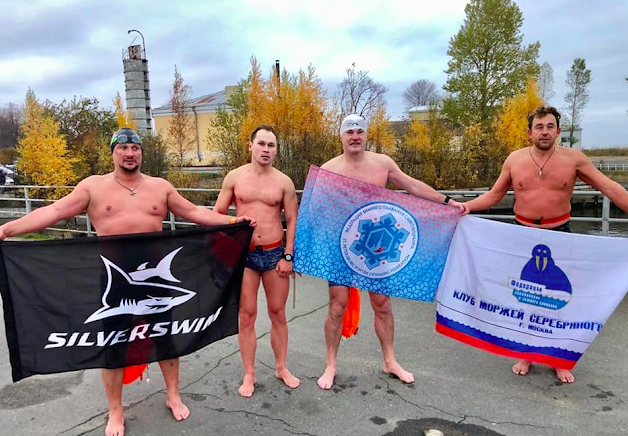 The Gulf of Finland Relay by Russian swimmers Roman Karkachev, Timur Falomkin, Andrey Zamyslov, and Anton Kutuev [shown above] was impressive and recognized in a very crowded field of unprecedented swims around the world. The foursome challenged themselves to a 25 km relay swim across the Gulf of Finland in late October. They did a total of seven 30-minute legs from Yelagin Island in St. Petersburg to Kotlin Island in the Baltic Sea. Each swimmer cumulatively swam 153 minutes in the water that started at 7°C and never rose above 9.6°C. 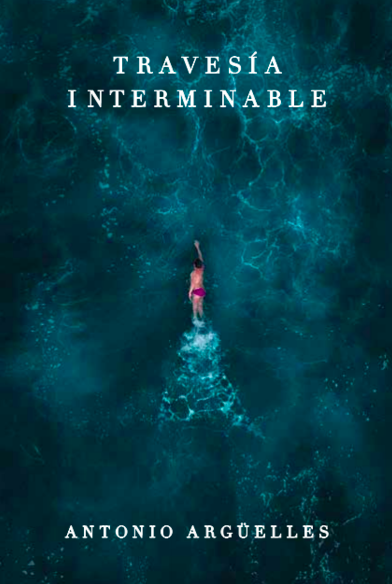 Travesía Interminable, a book co-authored by swimmer Antonio Argüelles and writer Adam Skolnick covers Argüelles’ life and experiences as he achieved the Oceans Seven.
The popular book delves into Antonio’s inner thoughts, vision, loves, worries, and challenges. His colorful, goal-setting life so full of achievements both in and out of the water actually masks the many obstacles that he had to overcome.

“The recipients are warm-hearted, inspiring ambassadors who represent the best of the open water world,” said Munatones.

“They are dedicated and passionate, talented and physically hardened. They are friendly and intelligent, strategic and fun-loving in their approach. They – and all the nominees – are the type of person who you would want as a friend, teammate, neighbor, coach or business partner.”

The 2019 WOWSA Awards nominees in each category, listed alphabetically, are as follows: