Gorée Island (Île de Gorée) off the coast of the Dakar, the capital city of Senegal, is known as the location of the House of Slaves (French: Maison des esclaves).

The House of Slaves was built between 1780–1784, but is now a tourist destination to show the horrors of the Atlantic slave trade.

Biram Diop is the race director for the 5.2 km prison island swim from the Senegal mainland to Gorée Island.

Reporter Nicolas Haque says here, “This stretch of Atlantic Ocean that separates Dakar from Goree is of historical importance. The island was a major hub for the African slave trade where African men, women and children were captured and boarded in ships to America.

Some in chains tried to escape and swim to the mainland in what was shark-infested water.

The [Traversée à la nage Dakar-île de Gorée] isn’t just a swim race. It is a tribute to those who were remained defiant refusing their fate as slaves instead of swimming to their freedom and resistance and the human spirit’s ability to overcome adversity.” 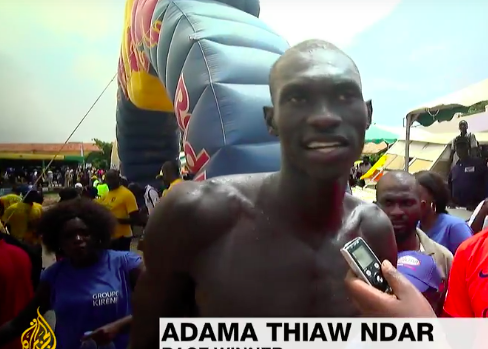 Senegal naval soldier Adama Thiaw Ndir and competitive pool and open water swimmer has seen much success in his favorite race. Ndir won the race in 2013, 2016, 2018 and 2019 and said after his 2018 victory, “This is a victory, not only for me, but for all our people here in Senegal and around the world.

The Traversée à la nage Dakar-île de Gorée, a popular ocean swim in West Africa, was first held in 1985. The course starts on the mainland from the shores of Dakar to the island of Gorée that is listed as a UNESCO World Heritage Site.

The event, traditionally held on the last Sunday in September, helps promote swimming in West Africa and is part of an overall lifesaving campaign against drownings. Organized by the Fédération Sénégalaise de Natation et de Sauvetage (Senegalese Federation of Swimming and Rescue), over 600 swimmers take part in its two race distances with the ultimate goal to be able to say, “J’ai Fait Dakar-Gorée” (or I did Dakar-Gorée).

Back on October 15th 1985, Samba Ndoye, Ibra Kare, Hachim Badji, Mbaye Ndiaye, Mohamed Diop, Karim Thioune and 24 others started a 3.5 km race between Dakar and the island of Gorée. Over the years, the start point changed making the race distance as long as 7 km. The race start is now fixed at the Voile d’Or beach in Dakar which faces the island of Gorée.