Wheelock and Hawley have uncanny similarities. Both Mexican women in their early 50’s are mothers, authors, attorneys, and adventurers extraordinaire. They also have foundations that accomplish a significant amount of good work for less fortunate children. They also motivate a lot of people of both genders and all ages to dream big and achieve much.

Wheelock completed the Seven Summits, climbing to the summits of the 7 highest mountains on the 7 continents. 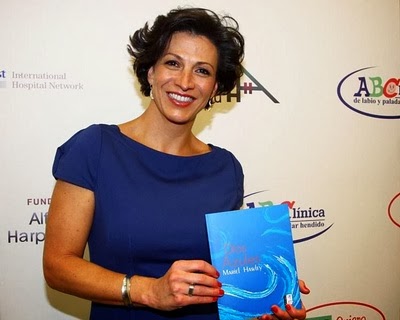 “Both women have a steely determination that is clearly the foundation of their phenomenal success,” observed Munatones.

“While Karla reached the world’s highest Seven Summits, Hawley has reached the aquatic equivalent, the Oceans even. They are motivational and maternal; they are passionate and pleasant; they are intense and intelligent, truly two remarkable woman who have reached the summits of their respective sports.”

Hawley raises money and awareness for Quiero Sonreír that pays for surgeries or medical treatments for low-income children with cleft lip and palate, as well as oncological treatments for children with cancer and other diseases. She explained, “The Quiero Sonreír (I Want to Smile) project began taking shape with the Sport City-Mexico four-way relay success in the English Channel.”*

Wheelock says about her motivational talks and books, “Being on top is indescribable, it is a personal feeling that you want to share with everyone.”

* Hawley later explained about the 42 hour 11 minute 134 km four-way relay, “Jorge Urreta, Luis Pineyro, Omar Díaz González, Alejandro Moreno, Mayalen Noriega and I thought that the 4-way English Channel relay crossing needed an altruistic twist. We wanted to reach out and touch the lives of other people through our efforts in the water. Our relay, which consisted of four men and two women, decided that children would be the ultimate target, and it occurred to me that we could swim to aid children with CLP. Without hesitation, I proposed to my teammates that we raise money in order to pay for surgeries to correct this condition. I invited them to the Brimex Clinic, which belongs to The American British Cowdray Medical Center in Mexico and is where surgery is provided to children lacking financial means. After a visit, they unanimously approved of the cause.

It is believed that CLP is a minor condition that is relatively easy to correct and that the corrections involved do not result in any major complications; however, this is not the case. Every year, approximately 2,000 children in Mexico are born with CLP. These cases not only include cleft lip, but also cleft palate in most situations. For these children, the first three weeks of life are critical due to lack of suction and major difficulties with swallowing. Their parents commonly do not have the skills required to face this problem, and in some cases the consequences are fatal. Thanks to the efforts of all of the members of the Sport City English Channel Relay Team, which swam the four-way relay across the English Channel in 2007, the Quiero Sonreír project began. To this day, the project continues with its mission to reach out, touch and transform the lives of the many children in Mexico born with CLP.”