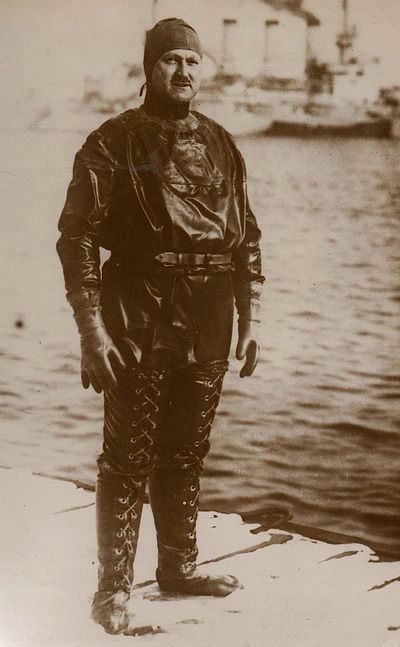 Otto Kemmerich, born in 1886, was an outstanding pool and open water swimmer from Germany who was inducted in the International Marathon Swimming Hall of Fame in 1968 as an Honor Swimmer.

Kemmerich was considered among the best open water swimmers of the world, but he also had full-time work as a dressage rider for different circuses, and was a manager with a health insurance company while he accomplished various unprecedented feats.

Most of his swims (listed below) were done solo – without any assistance and without an escort boat or crew.

In his equipment bag that he dragged along with him, he always had a watch, a compass, and a seamap which he carried in a duffel bag. He marked his position in the water with a red flag.

*1924: he swam from Husum to Westerland in Germany

*1925: he swam the Fehmarn from Fehmarn to Denmark

*1925: he tried an island-to-island swim from Husum to Sylt, but he abandoned the swim during the last stage from Amrum to Sylt due to strong currents

*1925: he swam from Norddeich to Norderney

*1926: he tried to swim the English Channel, but aborted due to an injured hand

*1927: he swam for 32 hours and set a new world record in endurance swimming

*1928: he swam 80 km in the Baltic Sea for 43 hours 15 minutes from Fehmarn Island to Warnemünde, Germany. During his nearly two-day adventure, he was feared dead because he was unescorted and truly swimming solo.

*1928: he swam a 46-hour endurance record when he completed several thousand laps of a 44-foot basin

*1929: he swam more than 100 km from Pillau to Zoppot (at that time both were located in Germany) along the coast unescorted without any assistance in 23 hours 15 minutes

*1929: he swam from Rottum to Borkum in a storm. On the next day, he tried to swim further from Borkum to Memmert also in a storm. Due to the storm, he drifted to Norddeich where he landed after 12 hours. He lost his duffel bag with all his equipment during this swim.

*1929: he swam in bad conditions 62 kilometer from Fehmarn (Lighthouse Staberhuk) to Warnemünde in 20 hours

*1952: at the age of 66 he tried to swim from Esbjerg, Denmark to Husum, Germany. He wanted to swim the distance of 200 km from island to island without a boat, but he died during the last stage from Sylt to Amrum. Nearly three weeks later on August 17th, his body was found.