Cave Dwelling In The Open Water 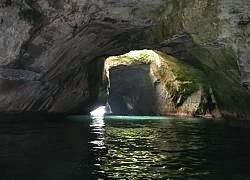 Masayuki Moriya of Ocean Navi organizes all kinds of swims and ocean expeditions around Japan and the western Pacific Ocean. Some are competitions, some are solo channel swims, some are relays, some are sea expeditions.

One of his recent sea expeditions was to Dogashima (西伊豆堂ヶ島) along the western coast of Izu Peninsula on Honshu Island in Japan.

He and a large group of masters swimmers enjoyed swimming in Tensodo (天窓洞) where they swam in and out of caves, along dramatic stone formations and cliffs, and underneath waterfalls. Located south of Tokyo, the area was formed by the lava flow of past volcanic eruptions and the erosion by the sea.