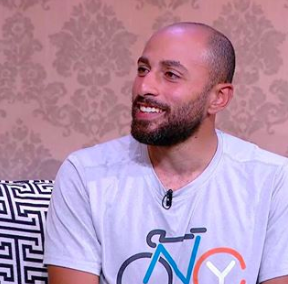 Omar El Galla does the extreme. The Egyptian cyclist, runner and open water swimmer is challenging himself to unprecedented distances in his native Egypt.

He has already cycled 6,500 km around Egypt in 65 days. He recently completed a 1,500 km stage run in 36 days along the Nile River from Abu Simbel to Alexandria.

After those extreme rides and ultra run, he is now planning to attempt a solo stage swim across the length of Egypt.

He will attempt the first assisted stage swim of the length of Egypt along the Red Sea coast from Suez to Shalateen.

“Whatever comes my way I’ll deal with,” he said before he set off on his extreme run.

He admits, “I am a novice [swimmer] really, I used to train a lot when I was younger between the ages of 6 and 12. Later, I would only do some recreational swimming at the pool. I also used to spearfish a lot from the ages of 21 to 26, spending long hours at the open sea. I did a couple of short triathlons in Egypt, swimming for very short distances in the process.

I recently have been interested in accomplishing some adventurous feats that require [significant] endurance, persistence and a good amount of stubbornness. I started out by cycling 6,500 km around Egypt in 65 days solo and self-supported.

I then ran the length of Egypt from the South at the City of Abu Simbel to the North at the City of Alexandria, along Lake Nasser and the Nile River, running 1,500 km in 36 days, averaging a distance of a full marathon a day. The run was completed solo and self-supported, meaning that I carried everything I needed in a specially designed backpack.

During those two extreme adventures, I did not pay any money for inns and accommodations.  That means, I had to camp in the wild, sleep in the rough, or rely on people to host me along the way in order to make the journey more adventurous and more challenging.

I also want to inspire people to follow their dreams and to pursue many things in life that they might have thought to be impossible, to challenge themselves, to test their physical and mental limits and try to stretch them further in order to achieve their goals and dreams, or maybe just to feel alive, feel fulfilled and feel happiness.”

The 31-year-old Egyptian extreme athlete estimates that it will take him 90 days to swim the entire 900 km distance on the swim leg of the Triathlon Egypt.

He explained the motivation to complete the 900 km swim, “I want to raise awareness through the swim to the issue of pollution especially plastic waste and its impact on the Red Sea. I also want to complete the final leg of my Triathlon Egypt project.  I already cycled around Egypt and ran the length of Egypt.

Finally, I want to challenge myself and test my physical and mental limits, try to stretch them further. I want to prove that with enough hard work and will power, you can reach your goals and dreams.  If you fail in the process after giving it your all, you will have gained so much in the end of it that it will not be a failure, but a victory, a win in life.

I am hoping that I might be able to inspire at least one person to go for something in their life that they thought was not possible.  In that, I will feel fulfilled. In the end, I just want to live, live life to the fullest and be happy.”

He can be followed @omarelgalla.