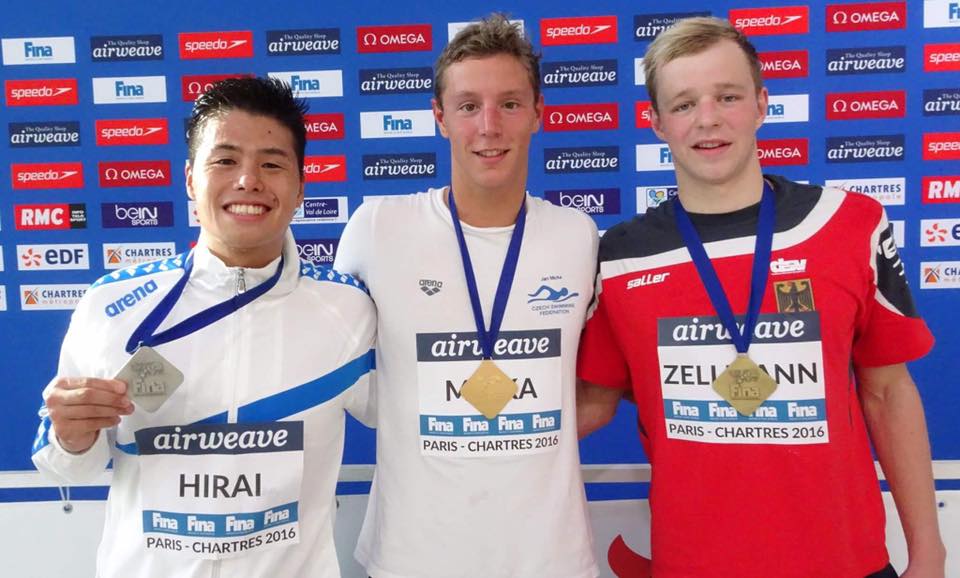 It was only until recently that many (most?) American competitive swimming coaches believed that participating in open water swimming competitions would led to slower times in the pool for their athletes.

But 2015 10 km world champion Jordan Wilimovsky and his coach Dave Kelsheimer are slowly influencing (changing?) this old-school way of thinking. With four lifetime bests in his 1500m freestyle in the leadup to the Olympic 10K Marathon Swim (from a 14:53.12 before the US Olympic Trials to a 14:49.19 in the US Olympic Trials to 14:48.23 in the Olympic preliminary heats to 14:45.03 in the 1500m Olympic finals), Wilimovsky is proving that you can get faster simultaneously in both pool and open water swimming.

But Yasunari Hirai of Japan and his coaches always knew getting better in the pool would help the open water – and vice versa.

Hirai recently smashed his best 1500m freestyle time with a 14:56:50 at the Airweave World Cup in France. This is not only the first time that he broke the 15-minute mark in the 1500m freestyle, but his lifetime best also comes after years of focus on training for the 10 km open water events around the world and a 8th place finish in the Olympic 10K Marathon Swim in Rio.

“It is a great start and a very important first step for my journey to Tokyo Olympics [in 2020].”